In 2004, Lindberg became the executive director of the Naledi Theatre Awards, which is now internationally recognised as the biggest and most prestigious awards event to recognise and honour excellence in SA theatre. 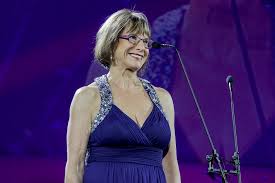 Tributes have poured in as fans remember founder and chief executive officer (CEO) of the Naledi Theatre Awards, Dawn Lindberg.

Lindberg  passed away on Monday night from a coronavirus-related complication.

The 75-year-old was a former Parktown Girls High pupil and completed a BA in fine arts at Wits University.

The theatre legend also achieved a diploma in stage design, art history and English in Italy.

Together with her husband Des Lindberg, they enjoyed a long and successful career as entertainers, and will be remembered for their hit song The Seagull’s Name was Nelson in 1971, which topped the charts for 20 weeks.

In 2004, Lindberg became the executive director of the Naledi Theatre Awards, which is now internationally recognised as the biggest and most prestigious awards event to recognise and honour excellence in SA theatre. Des and Dawn have made 15 albums and have several hit songs including Die Gezoem van die Bye and 16 Rietfonteins.

In 2015, they were designated “living legends” by the Minister of Arts and Culture, Nathi Mthethwa.

In show business for over 50 years, their company, Cabaret and Theatre, was established in 1965 and was the first non-racial theatre production company to perform in public venues all over South Africa.

Naledi spokesperson, Chris Avant Smith, said: “Her passing is a huge blow to the South African theatre industry. Dawn was a legendary anti-apartheid campaigner; she will be missed by all of us at Naledi and throughout the theatre community.”

In a Facebook post, the Naledi Theatre Awards remembered Lindberg by sharing a video in which she apologises for not attending an award ceremony due to Covid-19.

Today we mourn with the rest of South Africa for the passing of icon Dawn Lindberg whose death was announced this morning. She lived her life to create awareness as well as to celebrate the great works in the arts.

May her soul rest in peace. pic.twitter.com/a3mjMnm9B6

“Dawn will be remembered and always celebrated as a theatre ambassador, a phenomenon to the world of theatre leaving behind an exceptional legacy of celebrating the arts,” said Xoliswa Nduneni-Ngema, CEO of Joburg City Theatres.

City of Johannesburg member of mayoral committee (MMC) for community development, Margaret Arnolds, expressed her heartfelt sympathy to the Lindberg family. “Our deepest condolences to all who knew and loved South African theatre folklore, Dawn. A selfless and courageous person who lived on stage and that touched many others. We are deeply saddened by the news.”

Posted by Theatre on the Square, Sandton on Monday, December 7, 2020

Our deepest condolences to all who knew and loved South African theatre legend Dawn Lindberg who passed away last night. A life lived for and on the stage and one that touched many others. RIP Dawn, thank you for everything you gave us. pic.twitter.com/N73pXhqRsF

The Roedean School Choir paid a special tribute to her life with a virtual performance of the song Hallelujah by the Pentatonix.

Among the tributes was the South African government.

We extend our condolences to the family and friends of the Founder and CEO of the Naledi Awards #DawnLindberg. A legend of the performing arts in South Africa.