Our Perfect Wedding: Bride, groom’s brother ‘kill it’ under the blanket

We mostly remember last week's episode of Our Perfect Wedding for the mini cooper food warmers, the remote controlled ice bucket and the absent family. This is what we will remember this week's episode for. 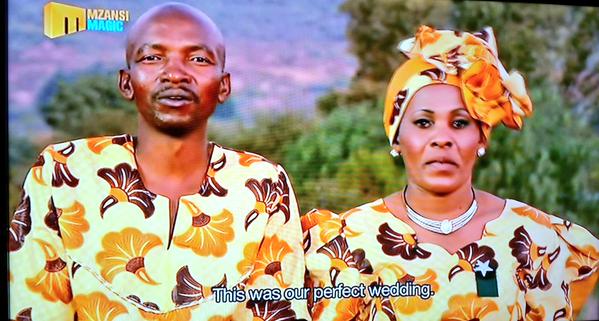 When the couple met, the groom asked the bride for her number, which she refused to give him, and asked him to give her his number instead. Well, she didn’t call him for three years. If it was the ‘waiting before calling him/her’ game, I’m pretty sure she wasn’t supposed to wait that long, but then, love prevailed in the end.

Thinking about last week’s episode, the couple did not receive support from friends and family. However, last night’s episode gave us a breather when we saw the bride’s aunt willing to make her niece’s dress for free.

So, the bride and groom decided not to see each other the week before the wedding day. I guess cultures differ, legend says it’s bad luck for the groom to see the bride the night before the wedding, last night’s couple made it a week. So what happens if culture requires them to do something together during that period?

When they slaughtered the cow, it was important that the groom and bride sleep under one blanket. But, because the groom and the bride were not seeing each other, the groom’s brother took his brother’s place. This raised a few eyebrows, but Tumi’s reaction just takes the trophy.

Family means having a loving aunt to make your dress for free! Tumelo is a lucky girl. #OurPerfectWedding

That watch can't be 15 thousands; I mean look at the table #OurPerfectWedding pic.twitter.com/YRROBVFze4

Pics in the front yard, just like that ☺… #OurPerfectWedding

That's the best n most beautiful wedding to come out of that village…. city peeps stay judging n know nothing! #OurPerfectWedding