Sibs Shongwe-La Mer is the 23-year-old filmmaker behind Necktie Youth, a movie portraying the middle-class identity of young South Africans who live in a no-man’s land of privilege and opulence.

“In the later part of our teens, a sense of mass depression started developing,” Shongwe-La Mer says in his poignant director’s note. “More and more common were adolescents from good homes in my city sent to clinics with slit wrists and pale pill-overdosed faces.”

These “born frees” were meant to be the epitome of the new South Africa and yet, for some reason, they are plagued by feelings of emptiness brought on by a lack of cultural identity. I meet the young director at his parents’ sprawling home in Inanda. I comment that the house is beautiful and he’s quick to point out that he doesn’t own it. “Film doesn’t pay that well,” he jokes.

We settle down the patio where he starts to explain why he decided to make Necktie Youth. He’s full of energy, a creative who has a lot of information to share. 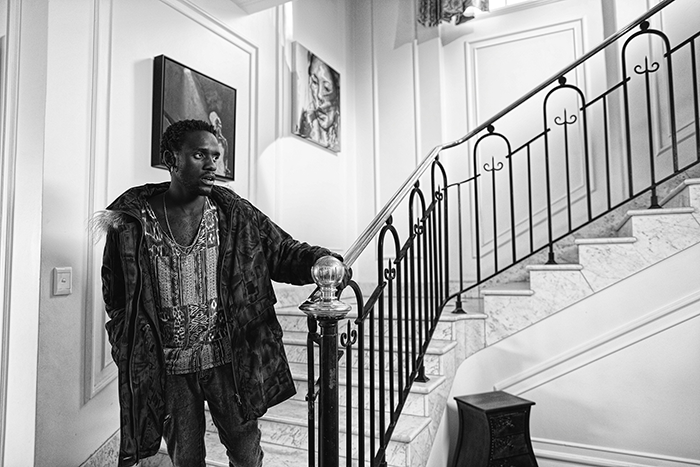 “These kids face a classic existential problem. In the townships, people have to worry about getting food to live. Here, kids have everything handed to them. They lack a purpose. They use drugs but not to have fun. It’s more a desperate plea because they don’t know what to do,” he says.

The movie follows the story of Jabz and September, two wellto-do kids who try to make sense of the live-streamed suicide of a friend. The self-destructive pair party their way around Joburg in a drug-induced haze. Shongwe-La Mer, who has suffered from depression, says many of his friends ended up committing suicide.

Like the recent case where a young girl jumped off the roof of Northgate Mall, there were no signs that these people had any problems. He believes this is partly because of the social media world, where everyone puts their best public foot forward, while another cause is the gap that exists between the youth of today and their parents, who were always told to keep their emotions in check. “It was really tough for them,” Shongwe La-Mer says when asked how his parents felt about the movie. “It touched very close to home. Some scenes were literally filmed in this house. But more than anything, they were proud.”

While Shongwe-La Mer was adamant the movie did not try to provide solutions – he thinks it would have been an arrogant approach – he believes communication, love and understanding will go a long way in helping today’s youth to face their problems.

“It’s almost as naive as saying ‘all you need is love’. What I want people to take away from the film is that we need to revert back to human values. We need to find ways to be more open and human. We lack empathy and we’ve stopped caring about people in our community. If we don’t, we may do irreparable damage.”