A Zulu father’s sjambok is a must in lobola

AmaZulu athi umendo awuthunyelwa gundane, which means you have to work really hard to get someone to want to marry you. 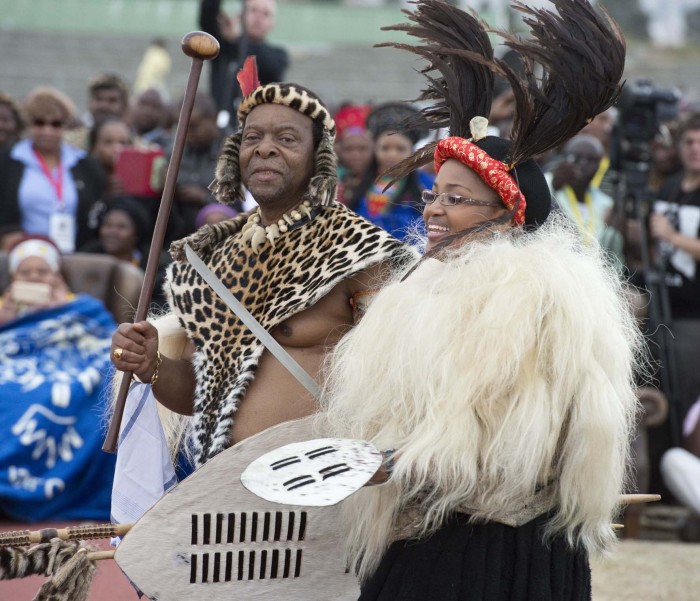 FILE PICTURE: Zola Mafu of Swaziland is seen with Zulu King Goodwill Zwelithini at their wedding in Ulundi in KwaZulu-Natal. Picture: Reinhardt Hartzenberg

In the Zulu culture, a man chooses his own wife, unlike the TshiVenda culture in the olden days. When a man meets a woman he thinks is a suitable wife for him, he tells her what his plans are and motivates why she should accept his hand in marriage. This is called ukushela.

However, as much as the lady has the power to choose her husband, she is required to tell amatshitshi (older women who were assigned to mentor and guide her) what the guy told her during ukushela and ask for their opinion in the matter. Amatshitshi would make a background check on the guy and his family to find out if he has good character and would be able to take care of their daughter.

If the guy got their approval, amatshitshi would give the lady beads for her to make a necklace to give to the guy as a symbol of love; there is no verbal agreement from the lady’s side.

When the man’s family sees the necklace, they know their son has found a woman he would like to marry, and they celebrate with him. The man’s family then sends delegates to the woman’s family to start lobola negotiations.

When the delegates get to the bride’s house, they stand outside the gate and start introducing themselves using clan names. They shout because the bride’s family will remain be in the yard, pretending to not hear anything.

When the bride’s family thinks the other family has shouted enough, they send a young boy to attend to them at the gate. They have to pay a goat/money to enter the gate.

They enter and are showed where to sit. The same boy is sent where the lady’s family are seated to tell them who they are and what they want. The family responds and says the bride’s father dilikemthini, that is to say, he has gone up a tree and therefore money is needed for him to come down and discuss lobola with them.

During this process, the groom’s family does all the talking while the lady’s family keeps quiet and listens. Imvulamlomo is then paid to the bride’s family for them to start talking.

Introduction takes place again. The bride’s family then acknowledges the relationship between the two since she would have told them about him beforehand.

Before the groom’s family is told how many cows are required, they are given izibizo, a list of gifts that the bride’s family requires before lobola negotiations. They then go back to buy the gifts.

The most important gifts include:

All these are for the bride’s father.

When they bring back the gifts, other family members join the celebration as a way of getting to know each other. The groom, however, is not allowed to enter his lady’s house. In fact, he is not allowed in at all before the wedding day.

After the ceremony, the delegates go to a separate room to start lobola negotiations. This is when they will be told how many cows are required of them. They are allowed to pay whatever they have that day and ask for more time and another date to come back and pay the full price.

The delegates include women, men and also the guy’s father, but his father and aunts are not allowed to speak. The aunts only speak when the uncles think the bridal price is too high. The groom’s uncles ask his aunts to go outside and have a word with the bride’s mother so she can convince her husband to lower the price.

They then go outside because the couple’s mothers are not allowed to be in the negotiations. If they are there, they make sure her identity remains a secret because her presence constitutes a fine.

Before the appointed date arrives, the groom’s family ask the bride’s family if they could have her for a month in which they will assess her to see if she is a suitable wife for their son. During that time, she is required to wake early before her parents-in-law and do house chores. It is not allowed for her father-in-law to see her, so she has to hide whenever he comes outside, as it is a sign of respect.

When the assessment period is over, her mother-in-law sends her back home with a folded blanket tied with a rope to give to her mother. When her mother unfolds it, a hole on it means she passed the test.

The groom’s family then comes back to make full payments and the wedding day is decided on.

Differences between now and then is that instead of a horse, the father gets a bicycle, and the assessment period is now a week compared to a month. The couples now talk and meet then in-laws before the wedding day.

NOTE: This is not conventional to all Zulus.