Political activist is armed with ink and driven by outrage. Some of Zapiro’s handcrafted collectible figurines of his most popular political caricatures.

Meeting the great Jonathan Shapiro – best known as just Zapiro – is intimidating. The SA cartoonist is always on the ball and the mere mention of his name creates a feeling of inadequacy.

The political activist always has something to say and often it’s not good – but today he is off duty. Shapiro is in Johannesburg on an author tour promoting the release of his new book, his 20th annual collection of cartoons, titled Rhodes Rage. Satire requires careful analysis of a situation, a wise approach and the reconstruction of that idea.

In Shapiro’s case, into a single image. Of course, his skilful hand plays a large role in this action, but it’s his bold thoughts and criticisms of SA’s rich and famous that has captivated people for the last 20 years. Born in Cape Town in 1958, Shapiro is the nephew of British magician David Berglas and cousin to Marvin Berglas, director of Marvin’s Magic.

He went on to study architecture at the University of Cape Town before he was conscripted into the army. It was during this time that he began to question his role in society. He flat out refused to carry a gun, and says: “I was prompted by my own circumstances to become an activist.” In 1983 he joined the newly formed anti-Apartheid movement and was arrested and, subsequently, monitored by military intelligence.

These circumstances taught him to stand up and fight and together with his artistic aptitude allowed him to establish himself as SA’s best known cartoonist. He confesses: “I’m not always sure how other people are going to react. Sometimes I realise it’s going to cause trouble, but I’m too stubborn and dogged and will say what I want to say.”

Asked how he selects which cartoons make it into the book, he says: “When doing cartoons for such a long time, you learn which ones are vital and which ones are the lemons. “There are still lemons.”

He’s also realised that people have different tastes and you’re not going to please everyone. 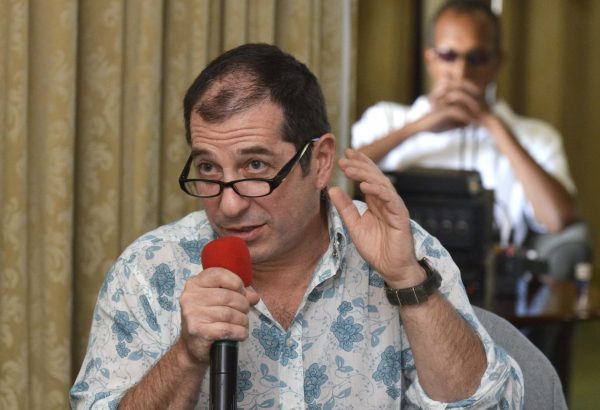 'An artist, a friend and a freedom fighter' - Zapiro receives top French cultural award
2 years ago
2 years ago Zapiro taken to task for alleged racism, rape metaphors
3 years ago
3 years ago

'An artist, a friend and a freedom fighter' - Zapiro receives top French cultural award
2 years ago
2 years ago

Zapiro taken to task for alleged racism, rape metaphors
3 years ago
3 years ago