The Whoopi Goldberg movie is a classic – Sister Act tells the story of a lounge singer who witnesses a murder and has to take refuge in a convent until the trial. She injects some much-needed energy into the establishment, infusing its music with feeling and ultimately saving it from closing. 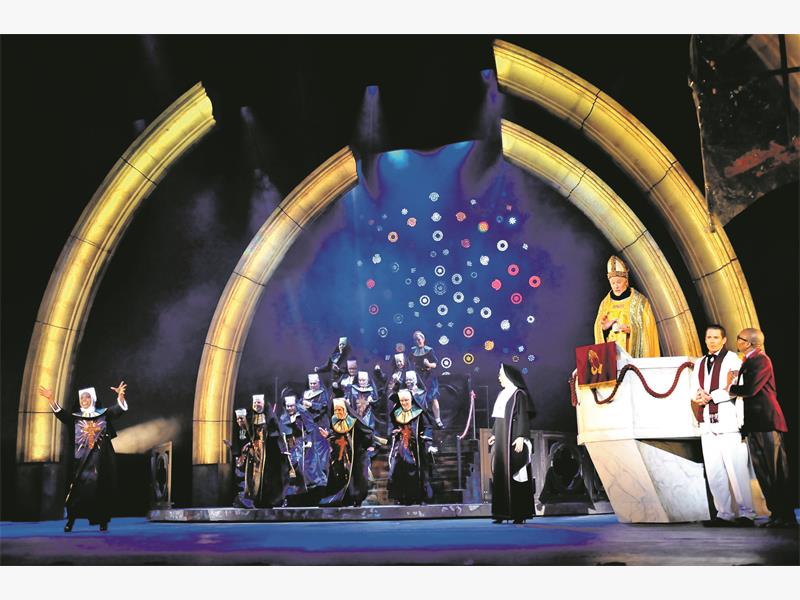 Taking on a favourite like this isn’t for the faint-hearted. Enter Janice Honeyman, pantomime queen and doyenne of the South African theatre industry.

“It’s such a feel-good show and such an affirming show to work on,” she says.

I met with Honeyman two weeks before Sister Act‘s première at the Joburg Theatre. The cast was doing its final run-through before going live onstage, but they weren’t in costume that day – except for Kate Normington, who plays the Mother Superior. Candida Mosoma, who plays the lead, donned Deloris’ purple stiletto boots and curly wig for the occasion.

“Thank you,” she answered with a laugh. “I wore it just for you.”

“We auditioned a lot of people,” Honeyman says of casting Mosoma as Deloris. “Candy somehow just got it. She has the charm and the warmth.”

Seeing this phase of a production is fascinating. The cast performed without mics and only a piano to support them. Around them, the crew moved sets, worked on costumes and made last-minute changes.

Two weeks later, I find myself at the Saturday matinee performance. The sets are amazing, disappearing on and off the stage as if by magic. The costumes absolutely transform the actors, so much so that I find it hard to pick out familiar faces from the rehearsal.

Mosoma’s Deloris is a real diva – sassy, like Goldberg’s character, but also ditzy and hyped-up. Her energy is contagious and it’s hard not to get caught up in it. Normington’s Mother Superior is spot-on. Her humorous prayers act as a fantastic plot device, guiding the audience through the story and making them chuckle as she tries valiantly to get rid of the troublesome fake nun changing everything around her.

The Joburg Theatre was given non-replica rights for the show, which means changes and adjustments could be made to the production.

Audiences might miss some of the songs from the movie – I was a little disappointed not to hear I Will Follow Him and My Guy. However, new musical additions such as It’s Good to be a Nun, a humorous account of all that Deloris will have to endure at the convent, and I Haven’t Got a Prayer, belted out with commanding conviction by Normington, are winners.

The songs in this production feature lines such as “put your backside in rotation”– Honeyman’s nuns are a tad more risqué than the cute older ladies in the movie – and tweaks to the story may not impress die-hard fans.

However, it’s entertaining. As Honeyman put it, the story has overall appeal that speaks to people of all races and religions.

“Come and raise your spirits,” she enthused. “The show releases tensions and gives you a really good time. It features talent that you will seldom see anywhere else.”