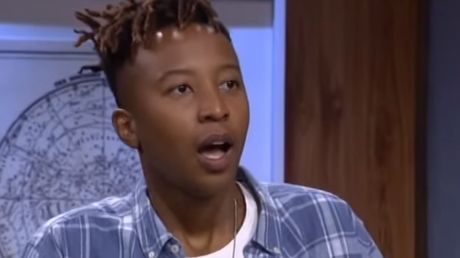 She arrived on the SABC 1’s Generations The Legacy as one of Mutodi Neshehe’s (Zola Radebe) soft spoken sons and portrayed her role as a man diligently, fooling a lot of viewers into thinking that Chi Mhende, who plays Wandile in the popular soapie is a man.

Sorry to burst your love fantasy bubble ladies, but Wandile is in fact a beautiful actress originally from Zimbabwe and dating actor Andile Nebulale best known as Sandile on the Cape Town movie, ‘Love the One You Love’.

For persuasively playing the role of a man on national television and making history, Chi deserves a standing ovation; most of her fans believe.

The former AFDA Student is very comfortable in her skin and has no sexuality problem whatsoever unlike the role she plays.

Despite mixed reactions on social media about her actually being a woman and acting as a man, Chi continues to expresses the love for her acting job on Twitter and being able to transform into the opposite sex before every viewers eyes, posting photos of her as a woman and as Wandile to validate her true gender to the uncertain fans of the soapie.

The astonishing actress who undoubtedly works hard on her craft managed to win an award for being the Best Actress at the 2014 Durban International Film Festival, was a lead actress in the award winning film Love The One You Love, MC for various events such as TEDx and is a voice over artists for various brands such as Al Jazeera, Sanlam, Mandela Day, to name a few.