Bonang told to ‘decolonise’ her mind, AKA gives fan an English lesson

Queen B urged a caller to speak English on air, while AKA showed a follower how to write the Queen's English. 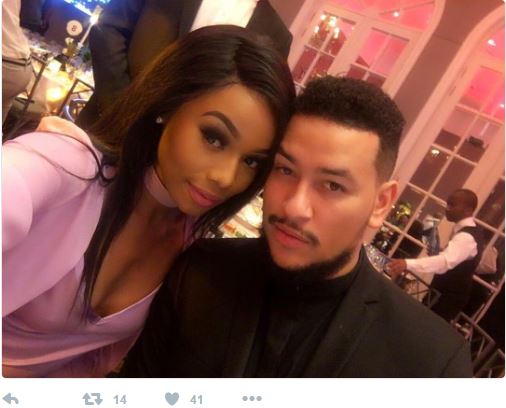 Bonang ‘Queen B’ Matheba received criticism on Twitter from Metro FM‘s Ask A Man listeners on Monday after asking one of the callers to speak English. When one Twitter user, ZandiJM, asked why Bonang thought it necessary, she replied: “Because Metro FM is an English station.”

Some of the listeners were not impressed with the response, saying if it was an English station, then it was meant for white people.

“English station for who? How many whites listen to Metro? Decolonise your mind Bonang please, it’s 2016 not 1948,” tweeted another listener.

Some said the presenter was excluding those who could not speak English. “And what happens then if you don’t know English? We don’t call in?”

“This is South Africa, we have 11 official languages, those who can’t hear what is said, it’s high time they learn or gladly piss off.”

“With all due respect what you said also made [me] uncomfortable, funny enough those English speaker never call in but blacks do,” were some of the comments she received.

Though some agreed with her, they also said she should have allowed the caller to continue and translate for everyone else who could not understand her language, as “people should express themselves in a language they are comfortable with”.

While Queen B found herself in the middle of this backlash, her boyfriend, Kiernan ‘AKA’ Forbes, was busy giving a fan an English lesson.

AKA took to Twitter on Monday to comment on the violence that erupted at Wits University in Braamfontein, Johannesburg, after students got into a stand-off with police.

In a series of tweets, the One Time hitmaker said government should not let the protests get to a point where “young ones are dying, where policemen/woman are dying”.

He further said there had to be a way to fix the fees crisis without the violence.

However, one of his followers responded: “U were quite like a church mouse when brutalize and assaults unarmed students [sic].”

We don’t think he was expecting the response he got from the Supa Mega.

“‘QUIET’ not quite. This is what the students are fighting for, so that your children may have a better education than you received,” he told the follower.

Though most found his response funny, some said AKA was using English to measure the follower’s intelligence.

Another user had a comeback for the rapper after he shared a picture on Twitter of two men holding bricks, questioning if they were students.

Check out the response below: 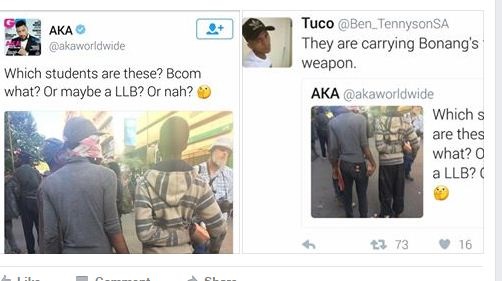