One Twitter user warned the media personality about taking her 'foolish' ex-boyfriend back. Bonang Matheba is once again the talk of the town after an interesting chat with her fans on Instagram Live.

South Africa’s media darling is doing her bit to help prevent the spread of the coronavirus by heeding the president’s call to stay at home.

To keep herself busy, Queen B decided to catch up with her three million plus followers on the gram.

Dressed in a stylish red two-piece and wearing a face full of makeup, Bonang urged the ‘B Force’ to stay indoors. “Happy Monday. I did my makeup so I can go dancing … Stay at home,” she told her fans.

During the live session, the 32-year-old showed off her dance moves while jamming to a song her ex-boyfriend AKA recorded with rapper Anatii.

Bonang Vibing To AKA, Are They Back On Good Terms?#Covid_19SA #cyrilramaphosa pic.twitter.com/zOiq5jCeQu

Social media users were shook. Some Twitter users speculated that Queen B was back with her former flame.

“They are in quarantine together,” one user joked.

They are quarantined together ???? pic.twitter.com/IYJgxfCjma

One Twitter user warned Bonang about taking her “foolish” ex-boyfriend back.

“AKA is a young, foolish & immature boy, Just like Itumeleng Khune . If Zinhle or Bonang want a normal stable relationship/ want to settle down. They must find someone old & matured just like Minnie Dlamini (sic),” the man wrote.

Bonang’s fans came to her defence, telling her haters that listening to a song does not mean she is back with AKA.

You still go to bed in your tired ex boyfriends hoodie kodwa Bonang isn't allowed to jam to AKA's music on her own IG… wenja,fuseg pic.twitter.com/QoxkTnS0b1

AKA’s Instagram Live video came less than a week after the rapper was singing her praises on Twitter. He called Queen B a “goddess” while clapping back at a Twitter user who accused him of using her name for attention.

“Bonang cannot be used. She is a goddess,” AKA replied.

It wasn’t the first time AKA caused a stir with Bonang related to social media activity. Just one day after confirming that he had broken up with his on-again girlfriend, DJ Zinhle, the Fela in Versace hitmaker started liking Queen B’s pictures on social media.

She set tongues wagging a few weeks later when she dished out a spicy clapback to a Twitter user who suggested she become friends with DJ Zinhle.

“I can’t wait for Bonang and Zinhle to make up. Two of the most hard-working personalities in our industry cannot be divided by a man when they can soar higher together. Moghel throw the first bone,” the tweep wrote.

Bonang replied: “Keep my name out this mess.” 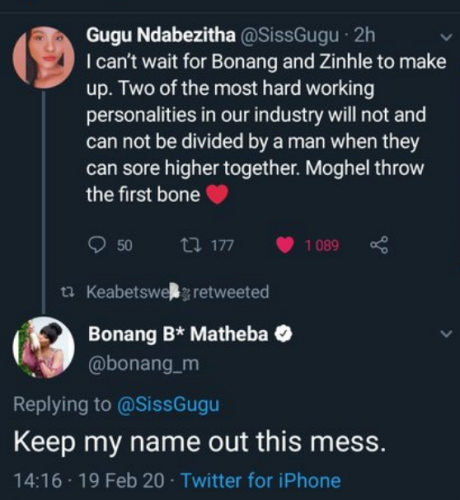