According to Disney historian Jim Korkis, the late Robin Williams' primary reason for lending his voice to Disney films was his children. Unlike his more dramatic roles (Good Morning Vietnam, Dead Poets Society), animated films were something his kids could relate to; something they would be proud of. 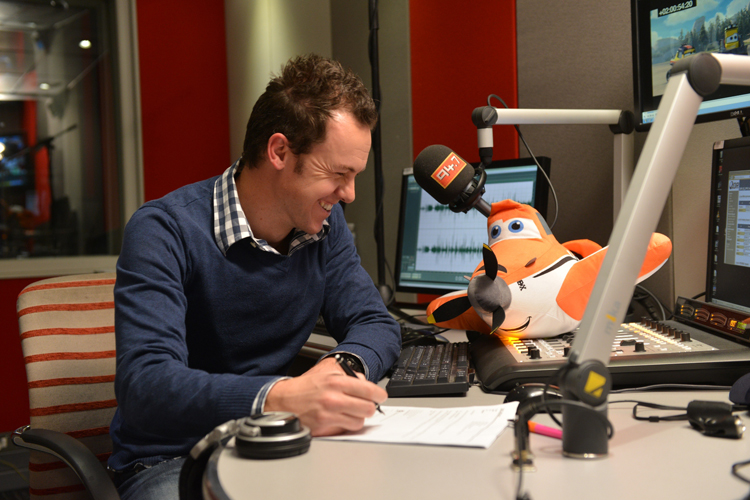 “Nate doesn’t care that I’m on radio every morning,” Simpsons says. “It means nothing to him. But he’s a massive fan of planes and I know he’ll be proud of his dad. It’s a tight contest between me and him as to who’s more excited about watching the completed movie.”

Despite this being a big gig for Simpson –it’s Hollywood, after all – he affirms that his son is his number one concern, and hopes that Nate will be his number one fan.

Much like Simpson himself, Drip is a cocky, fun-loving character who gets away with pretty much anything. One of five firefighters called the Smokejumpers, he is an elite aircraft devoted to protecting historic Piston Peak National Park from raging wildfire. Drip is always leaking oil and uses a skid-steer claw to clear fallen trees and brush.

“The first thing I thought when I received the offer was ‘Why me?’. I didn’t think I had what it takes,” Simpson says. “I’ve always known that acting wasn’t for me. I’ve been offered deals before, but always turned them down because I’m not an actor. This, on the other hand, was different. I was very nervous. I had no experience whatsoever, but in a way it was quite similar to what I do every day.”

Given the go-ahead to record in his own studio, using his own microphone, Simpson felt at home. With the director on the phone through the entire process, he followed the visuals he’d been sent, matching his voice to the movement of the mouth on screen.

“It was like being a kid again,” he says. “If someone walked past the studio, they would have thought I was crazy. I let loose in there, with hand gestures and body movements and a lot of veins popping out on my neck.” Christine Service, Senior Vice President for The Walt Disney Company Africa, says, “Darren brings that local flavor, together with a great mix of comedy and a very big heart.”

> Tune into 94.7 Highveld Stereo to win movie merchandise and tickets to the South African premiere of the film.

When world-famous air racer Dusty learns his engine is damaged and he may never race again, he must shift gears and is launched into the world of aerial firefighting. Dusty joins forces with veteran fire and rescue helicopter Blade Ranger and his team, a bunch of all-terrain vehicles known as The Smokejumpers. Together, the fearless team battles a massive wildfire and Dusty learns what it takes to become a true hero. – imdb.com