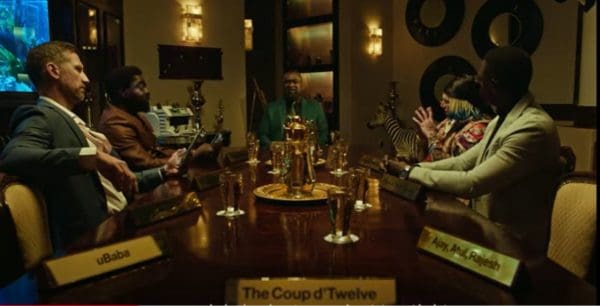 Let’s face it we need a laugh. Nando’s Scamandla and Ekhuruleni ads came at just the right time.

Between the neverending lockdowns, alcohol bans, unpredictable load-shedding, the corruption endemic, soaring unemployment and a multitude of scams in every part of the country, it’s safe to assume we need therapy as a nation.

Even “My fellow South African’s” has become somewhat of a four-letter word.

They say laughter is the best medicine – or in our case, it is probably the cheapest – if not the only form of therapy accessible to us peasants.

Nando’s is serving up just what a battered nation needs, and it’s cheaper than the Prego meal being advertised.

Nando’s ads: Have a chuckle

In the first advert uploaded to Youtube, the flamed grilled chicken kings took a swipe at former Health MEC Zweli Mkhize in their Scamandla advert.

The 45-second ad opens outside a posh house, aptly named Saxonwold. Inside, a clandestine roundtable meeting of the ‘South African Scamming Association’ is taking place. The organisation’s slogan – Scamandla!

The Scammer-in-chief is unhappy because “South African’s budget is too tight to invest in anything.” He goes onto say they need something new to capture the minds and wallets of South Africans, something “digital and vibey.”

The story plays out exactly like Tembisa’s ten but in Ekhuruleni, with calls for donations, world records and government visits. But in the end, no babies are found.

Between scams and fake news, Nando’s says its prego meal is something Saffers can afford.