Just months after agreeing to marry her partner, Tshepo, K Naomi has confirmed that they are expecting their first child together. 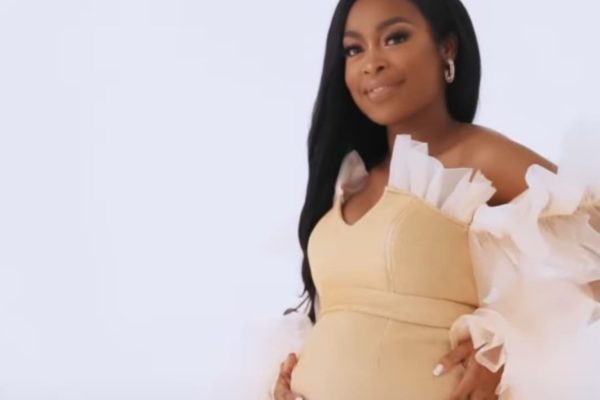 K Naomi announced that she will be welcoming her first child with her partner Tshepo. Picture: Instagram (Screenshot)

Shortly after agreeing to marry her long-time partner in a romantic proposal, model K Naomi (Keitumetse Naomi Noinyane) has announced that she is also going to be a mother.

“Oh Baby! Another beautiful chapter… So excited, so nervous, Baby P is on the way! And so the journey begins #AGodThing,” wrote K Naomi underneath a video taken during her maternity photoshoot.

The video opens with a hair and makeup team beautifying K Naomi, who is wearing a white twin-set with a feathered trim.

She takes one final look at herself before walking over to the clothes selected for her shoot. She selects a gold dress with ruffled, cream, tulle sleeves and makes her way on to set before revealing her pregnant belly.

K Naomi also shared the fact that her reveal was scheduled on the same day as her late mother’s birthday.

Every year in April, the Mahikeng-born starlet marks the date of her mother Margerette Noinyane’s passing. She passed in 2012 and K Naomi has been open about how she struggles with the loss on social media.

Her posts have often prompted other social media users in the same boat to share their own emotions around losing a parent and the aftermath of coming to terms with the fact that they will never be able to see or speak to them again. They have also expressed how this helps them not feel alone.

In October, she announced her impending nuptials in a similar fashion to her pregnancy announcement, with a behind-the-scenes video of a romantic getaway with her partner Tshepo, which turned into an engagement.

“All I want to chase is beautiful dreams with you. #KNxTP A snippet of a beautiful moment… I’m so grateful and truly blessed to be loved and to be embarking on this journey with the coolest guy on earth, my bestie! I prayed for you,” she wrote.

Although it was no secret that she was in a relationship, not much else is known about Keitumetse and Tshepo’s relationship, and she prefers it that way.

However, given how open she has been about this chapter of her life, fans are hopeful that she will share some video snippets and photos from her baby shower, birth and wedding.

READ NEXT: K Naomi puts DJ Shimza on blast for ‘breaking’ her