IN PHOTOS: Celebrities and politicians the Queen met during her reign

The Queen has shaken a lot of hands during her reign, including three South African Presidents.

In her 70 years on the throne, Queen Elizabeth II met many personalities and political leaders, from Marilyn Monroe, who she met when they were both 30 years old, to Lady Gaga and many more famous faces.

The Queen was just four years into her reign when she met Hollywood icon Marilyn Monroe at the Royal Film Performance of The Battle of River Plate in 1956.

Her list continued to increase year after year with meetings taking place at Buckingham Palace as well as film premieres and other A-list events.

She’s also met with every U.S. president who served during the course of her reign. 3/8
US President Bill Clinton (2nd L) talks with Queen Elizabeth II 2nd (R) along with the First Lady Hillary Rodham Clinton (L) and daughter Chelsea (R) at the Garden Entrance of Buckingham Palace 14 December 2000 in London, England. The Clintons had tea with the Queen as they are wrapping up their three day trip to Ireland, North Ireland and the UK. (Photo by PAUL J. RICHARDS / AFP) 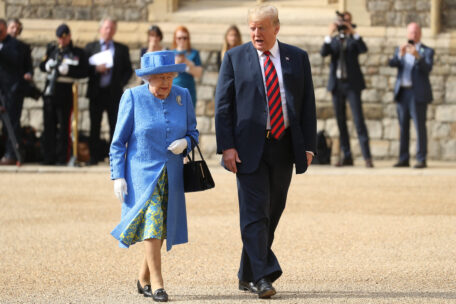 4/8
US President Donald Trump (R) and Britain's Queen Elizabeth II (L) leave the Quadrangle after inspecting a Guard of Honour during a ceremonial welcome at Windsor Castle in Windsor, west of London, on July 13, 2018 on the second day of Trump's UK visit. - US President Donald Trump on Friday played down his extraordinary attack on Britain's plans for Brexit, praising Prime Minister Theresa May and insisting bilateral relations "have never been stronger", even as tens of thousands protested in London against his visit. (Photo by Chris Jackson / POOL / AFP) 5/8
US President Barack Obama (L) and his wife Michelle (2nd R) meet with Britain's Queen Elizabeth II (2nd L) and Prince Philip, the Duke of Edinburgh (R) during an audience at Buckingham Palace in London, on April 1, 2009. US President Barack Obama visited Queen Elizabeth II at Buckingham Palace on Wednesday while his in London for the G20 summit. Obama and wife Michelle were hosted by the queen for a meeting, the day before the crunch summit on tackling the world economic crisis. AFP PHOTO/John Stillwell/WPA POOL (Photo by JOHN STILLWELL / POOL / AFP) 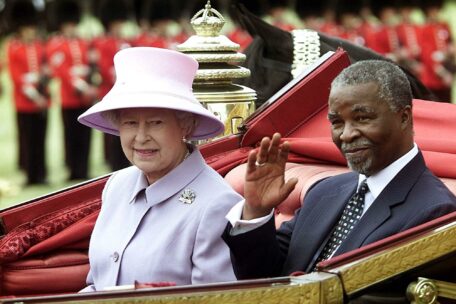 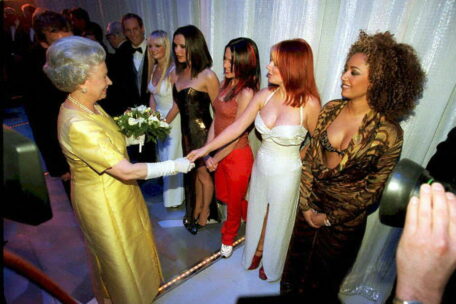 8/8
South African President Jacob Zuma (L) smiles as he greets Britain's Queen Elizabeth II during a ceremonial welcome on Horseguards Parade, in London, on March 3, 2010. South African President Jacob Zuma was given a British royal welcome Wednesday as he began a state visit with colour and pomp, although a row over his polygamy risked clouding the trip from the start. Queen Elizabeth II greeted Zuma on Horse Guards Parade before accompanying the controversial leader in a black-and-gold horse-drawn carriage to Buckingham Palace, where he is staying for the three-day trip. AFP PHOTO/Chris Jackson/WPA POOL (Photo by Chris Jackson / POOL / AFP)

The Queen has had the pleasure of meeting every actor to have played the famous 007 spy, James Bond.

In 2012, Daniel Craig – who played Bond at the time – accompanied her majesty to the opening ceremony of the London Olympic Games.

The Queen also met many musicians during her reign, from Frank Sinatra to UK pop sensation, the Spice Girls.

In 2014, she travelled to the set of the hit show, Game of Thrones, where she declined the seat on the Iron Throne.

An old tradition prohibits the reigning English monarch from sitting on a foreign throne.

Therefore, she politely declined the offer from producers, much to the surprise of cast members Lena Headey, Kit Harington, Maisie Williams, and Sophie Turner.

Then in 2018, she joined Anna Wintour, the editor-in-chief of Vogue, in the front row during London Fashion Week.