Kenny Kunene living it up in London

Failed politician, businessman and founding member of the Economic Freedom Fighters (EFF) Kenny Kunene is shopping for high-end suits and shoes in London. On Wednesday, Kunene posted a picture on social media shopping while enjoying a cup of tea at Louis Vuitton in New Bond Street. Kunene, dubbed ‘The Sushi King’, is known for throwing extravagant parties. In 2014, Kunene partied up a storm at the Taboo Nightclub in Sandton as he celebrated his 44th birthday. Themed “Nyotaimori”, he indulged in the Japanese practice of eating sushi off the bodies of a naked women. Hundreds of people hovered over the tables where Kunene’s models laid, pieces of sushi covering their private parts.

Two months ago, Kunene, warned that if EFF leader Julius Malema became the president or deputy president he would pack up and go live outside the country.
“He has an obsession with money and the good life,” Kunene told journalists.
“He has no regard for the future or stability of this country.”

Kunene could not be reached for comment as his phone was on voicemail. 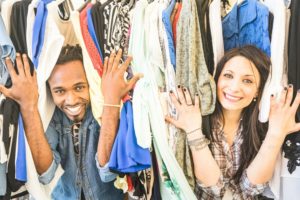