In a breathtaking piece of political engineering, the dominoes at 'Survivor SA' Tribal Council fell in the wrong direction for Marisha. 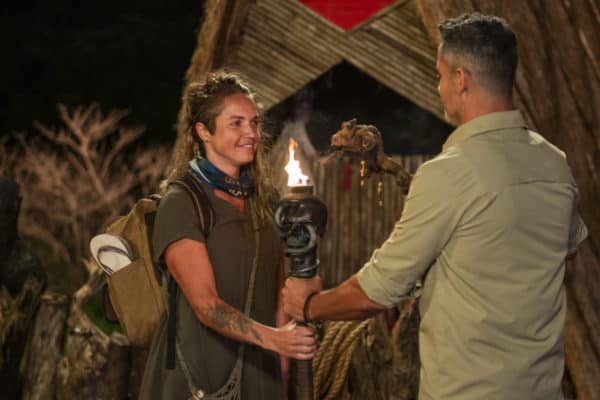 Blindsided. Marisha's torch is snuffed as she is voted out of Survivor. Picture Supplied.

In a breathtaking piece of political engineering on Survivor South Africa, the dominoes at Tribal Council fell, and fell hard, in the wrong direction.

That is what blindsided Marisha must have felt when her torch was snuffed in episode 8 of Survivor South Africa, Immunity Island.

After merging Zamba and Vuna into Osindile, meaning the one who made it through, the now blue-buffed tribe set to work immediately, spinning a web of deceit and a plot so complex, yet simple.

The hustle also forced castaways to show their hand during voting.

Everyone is back at zero, everyone is fair game. To date, this is probably one of the best episodes.

Almost at the centre of Survivor’s intrigue this week is Santoni, whose double-play ultimately engineered the entire show.

While many in the tribe still underestimate her, voting showed the online store owner’s loyalty presently lies with the motley alliance between Chappies, Kiran, Tyson and Wardah.

It was a vote where Chappies did not come first in the popularity contest, but won by a mile when it came to strength and implementation of a plan.

Again, without Santoni pulling the strings, none of this would have happened according to the ‘somewhat’ plan.

Survivor SA host Nico did say that with merge, castaways now had to sleep with ‘one eye open’.

Marisha’s demise was set in stone at the tribal feast on merge.

She annoyed Santoni by suggesting that there is likely only a few Tribal Council’s left for the master counteragent.

Later in the show, Marisha threw Anesu under the bus when the vegan animal lover accidentally freed the chickens.

This while Chappies found a vantage point in a bush where he was able to spy on tribe mates, in this episode learning about Anela’s Tribal Insurance.

Old alliances between the original Vuna and Zamba members remained in play, but it is likely to dissolve very quickly, as it is game on henceforth.

The new Osindile camp came with some luxuries.

A decent shelter, a hammock, some backpacks with supplies and the chicken coup. But by the time the blue buffs arrived, battle lines had already been drawn.

Chappies secured his survival with a cunning emotional interlude with Wardah at the merge feast, revealing the family video “dessert” that Vuna enjoyed last week in Survivor.

Shaun took umbrage to this, as everyone previously agreed not to share this moment. But it gave Chappies some latitude, and positioned him alongside Wardah in leading an alliance.

Last night also saw a bit of fun as Anela and Shaun tickled Chappies’s curiosity and sent him on a wild goose chase, following the now useless clues, which were bits of paper that Anela had shipped in from his recent visit to Immunity Island.

ALSO READ: Survivor SA: It is all a curious muddy puddle of drama

In an episode of Survivor SA where Chappies was more animated than usual, the pressure-cooker environment brought out the best and worst of the castaways as the lay of the land was being sought.

The Immunity Challenge saw Kiran manage three and a half hours of hanging from a pole.

Chappies did not make it.

Between Kiran and Anesu, who held on almost as long, it was agreed to send Tyson to Immunity Island as the third hanger-on. Tyson let go and headed off to the island, only to return sans playing.

It was all part of a great setup, and one that ultimately saved Chappies and defeated Marisha.

Survivor SA Tribal Council was a game of chess.

Renier saves Nicole with his bequeathment of an idol. Tyson saves Chappies with his second Immunity Idol.

The Wardah-Chappies faction vote for Marisha in unison and while in the minority, they managed to save their alliance.

Nicole’s tears on Marisha’s departure may not have been for the exit of a friend, but more than likely fear as she is now exposed, and should the hustle go unfavourably for her next week, she is likely to be on the hit-list to go home.