OPINION: Is Kelly Khumalo really wrong for saying she ‘made’ Senzo?

Speaking at a private event for 'Life With Kelly Khumalo' season three, the reality star compared the effort Senzo Meyiwa and Jub Jub put in. 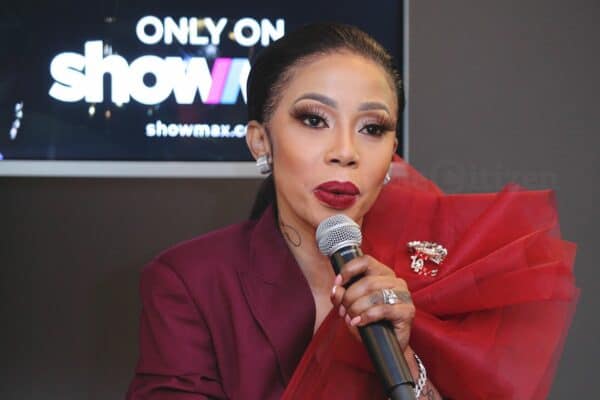 Kelly Khumalo speaking at a private event ahead of the launch of 'Life With Kelly Khumalo' season three | Picture: Supplied

By now, you’d be hard-pressed to come across a South African with a television and access to social media who hasn’t heard Kelly Khumalo’s comments in response to allegations that she benefitted from the Senzo Meyiwa brand over the years.

She made the comments in a seven-minute interview with eNCA’s Slindelo Masikane ahead of the launch of the third season of her Showmax reality show, Life With Kelly Khumalo.

Was she wrong? Debate rages on about Kelly Khumalo’s comments about Senzo Meyiwa’s fame

The clip of that particular comment made it’s way to social media and was distributed via countless channels resulting in Kelly Khumalo dominating headlines on Tuesday, the same day that her show went live on Showmax.

Many have shared their thoughts on social media and even gone as far as calling radio stations to insult Kelly and call her delusional, arrogant and self-centered, but was she wrong?

While the word “nobody” evokes strong emotions among soccer fans who loved the late Bafana Bafana captain and Orlando Pirates goalkeeper, as well as those who revile Kelly for her alleged involvement in Meyiwa’s death, the fact remains that there is a significant number of people who had no idea who Senzo Meyiwa was prior to him making headlines for cheating on his wife with Kelly Khumalo and going on to have a child with her.

There is a saying that holds precedence of facts over feelings and soccer fans need to remember this when listening to Kelly’s comments.

How you feel about her comments does not negate the fact that the tabloid fodder of their relationship introduced them both to new audiences and that his death, and the media coverage thereof almost defied him in the eyes of many when he lived a somewhat lowkey life outside of his popularity as a soccer player.

ALSO READ: ‘They hate that I did not die that day’ – Kelly Khumalo

You can spend all day arguing about both the meaning of the word “nobody” and whether or not Kelly knew what she was doing in choosing to make that statement, but the fact remains that she (and Showmax) have emerged victorious as a result of all the attention being paid to that very statement.

Kelly Khumalo is dominating headlines and conversations on the launch date of her show. You can only dream of receiving that kind of free marketing.

If you feel strongly about the things she had to say in her eNCA interview, then you might not be ready for the candid things she has to say on the third season of her show. Not just about the death of Senzo Meyiwa but about her relationship with Molemo “Jub Jub” Maarohanye and their continued attempts at co-parenting their son Christian. This is in addition to her comparison of Senzo and Jub Jub as fathers.

Life With Kelly Khumalo also gives the star her own platform to respond to the notorious Netflix documentary on the events surrounding Meyiwa’s death and the upcoming follow-up episodes covering the long-awaited trial for his murder.

After viewing the first episode of Life With Kelly Khumalo over the weekend and a private screening event attended by Kelly, her mother, her lawyer, her children and her new love, one can only wonder what the reaction will be to the continued candour of one of South Africa’s most polarising public figures.

In just 25 minutes, we see Kelly give her ex, Jub Jub, the middle finger over his Mother’s Day message, bring Somizi to tears at her first gospel concert since lockdown, and complain to her bestie, Wanda Baloyi, about having the worst in-laws ever.

She then goes on to explain that she owes that statement, in part – to the fact that both her in-laws doubted the paternity of both her children and, in the case of Meyiwa’s parents “went to the witchdoctor to get rid of me!”.

How do Jub Jub and Senzo Meyiwa differ as fathers?

Speaking about the difference in parenting styles between Jub Jub and Senzo, Kelly explained why she feels as though the Uyajola 9/9 host is not stepping up in the same way the late soccer player did.

“I am not going to sit here and take away the beauty of Senzo as a father. I cannot, irrespective of how the world sees him, I don’t care,” she added.

Kelly went on to reveal that she and Senzo had a number of disagreements, with one even leading to her blocking him from contacting her and he bypassed the block by phoning those around her to get access to her daughter and even went so far as to phone her from a different number.

“This is a man who wants to be present please compare notes.”

“So, he calls me from a different number and because I don’t know the number, I pick up; ‘hellooo?’ and he says ‘uzimithisile wena?’ [did you impregnante yourself?] ‘mangabe uzimithisile kilungile, but lomtwana, owami’ [if you impregnated yourself, then it is fine but that child is mine].’”