Onesie could make it a 'three-sie' for new trainer Mark Dixon in the main race at Scottsville today, a Pinnacle Stakes over 1600m. 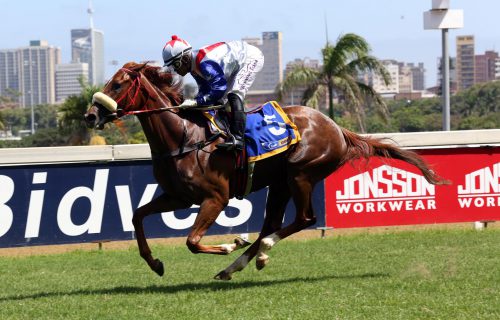 READY TO WIN: Onesie looks ready to notch up a third win when he runs in Race 6 at Scottsville today

This four-year-old, who is long overdue a third career win, was a close third over 2000m at Scottsville three runs back and followed up with a fast-finishing second over 1600m at Greyville. Then joining Dixon’s stable and coming off a three-month break and backed, she again put in her best work late and finished a promising runner-up over the same course and distance.

However, with the benefit from that run and having the advantage of the best draw she should recover the losses. The two-time winner could be followed home by Lala and Diamante.

Anton Marcus doesn’t feature in the Pinnacle Stakes, but could be the right call for some other races as he seems to have a number of good rides.
In Race 2 he rides Dennis Bosch-trained Flamenco Dancer who looks a star bet in a Maiden Plate (F&M) over 1000m.

And he could score another victory in Race 5 when he takes the ride on James Goodman-trained Gimme Hope Johanna in a Maiden Plate (F&M) over 1400m.

This three-year-old showed good improvement in her last two outings, the last of which was an encouraging 2.75-length third over 1200m despite her not having a trouble-free run.

Making most appeal of the remainder are Victorious Diva, Kinglassie and Everlasting Love.