Star Burst Galaxy looks on target to make it three wins in a row in Race 6, a Conditions Plate over 1400m at Fairview today. 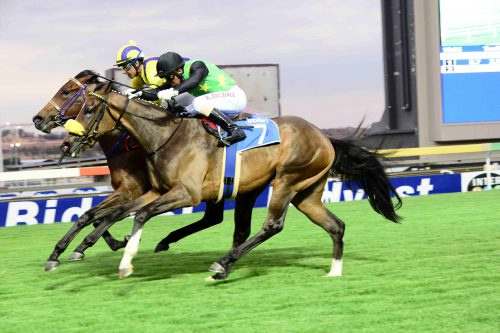 IN FORM. Star Burst Galaxy looks on target to make it three wins in a row in Race 6, a Conditions Plate over 1400m at Fairview today.

Tara Laing-trained five-time winner Star Burst Galaxy has struck top form with Callan Murray aboard and the combination looks on target to make it three wins in a row at Fairview today when contesting Race 6, a Conditions Plate (F&M) over 1400m.

The filly followed four seconds with an unlucky sixth from a bad start. Then coming off a break of almost four months and ridden by Murray, she posted an impressive double over 1400m and 1200m – the last of which saw her win fluently by 2.50 lengths from Beataboutthebush. Though being 2kg worse off with Beataboutthebush this time, Laing’s filly should be up to the task again.

She could be followed home by Beataboutthebush, Peach Delight, Wind Singer, Our Destiny and Firstimesacharm.

There is likely to be a close call in Race 7 but the one who could have the edge in this tricky 1800m MR 92 Handicap is Justin Snaith-trained seasoned campaigner It Is Written with Louis Mxothwa aboard. The gelding, who is overdue for a ninth career win, continues dropping down the merit ratings and his winning turn could come this time. His unplaced last run in a 1600m Pinnacle Stakes can be excused as he was hindered by a slipped saddle.

Expect a bold bid from Yvette Bremner-trained Laws Of Succession with champion apprentice Lyle Hewitson in the saddle. This nine-time winner followed up a fine double with a good third in a 1800m feature event, and was not disgraced in his subsequent outing when caught late and finishing eighth out of 17 in the 2000m Algoa Cup.

Also in with strong claims is five-time winner Road To Indy (Ryan Munger) out of Laing’s stable. The five-year-old has been threatening another win in recent outings, more so, last time when beaten into third place by just a head in a Pinnacle Stakes over 1600m.

The pick of the others are Chit Chat, Inviting Lily and Masterly.