Roaring Lion, Hazapour and the weather look the dangers. 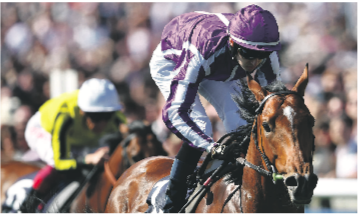 DERBY FAVOURITE. Saxon Warrior ticks all the right boxes and is a con dent selection to win the Investec Derby at Epsom on Saturday.

London -Fingers crossed that the monsoons that have been sweeping Southern Britain will continue to miss Epsom this week a nobody wants Saturday’s Investec Derby to be run in a mudbath like it was in 1983.

The legendary Lester Piggo steered Teenoso through a quagmire that year, bringing his record ninth and fi Derby winner home in a time 17secs slower than Golden Horn clocked in 2015.

There is not a racecourse in the world that compares with the historic Surrey Downs, and Epsom’s roller-coaster circuit is arguably more suited to Disneyland than the venue for the greatest horserace on the globe.

However, that is what makes THE Derby so special. It is the ultimate test of the thoroughbred – you need a horse who not only has speed and stamina but is athletic enough to be able to cope with the unique undulations and camber that he meets up the home straight as well as handling the razzmatazz and hullabaloo of the preliminaries.

We won’t know until around 5.35pm South African time on Saturday whether odds-on favourite SAXON WARRIOR ticks all those boxes, but it certainly helps that Aidan O’Brien, the colt ‘s trainer who is seeking a seventh success in the race, can boast a gallop at Ballydoyle which is the exact replica of Epsom.

“We have never had a horse like him,” Aidan confided, and one senses none of the powerful Coolmore team are envisaging defeat for the unbeaten 2000 Guineas winner, whom I recommended you all take the 9-2 being offered for Epsom before Newmarket.

Obviously, Saxon Warrior jumps up in distance, from 1600m to 2400m, but the fact that “the lads” have given Aidan the green light to aim him at the Triple Crown – last achieved by Coolmore’s Nijinsky in 1970 – suggests you won’t find anyone in Tipperary worried about stamina.

Saxon Warrior, who is a physically awesome son of Japanese superstar Deep Impact, with a seemingly bombproof attitude, has twice beaten second-favourite Roaring Lion, and, while I still feel that John Gosden’s impressive Dante Stakes winner is the danger, the “jolly” was in front way too soon in the Guineas and can confirm the form.

Gosden is adamant Roaring Lion has more speed than his 1997 winner Benny The Dip but admits that his initial plan was the French version (2100m) at Chantilly, so clearly there are slight doubts in his mind about the colt’s ability to stay this longer trip.

There are no such stamina doubts about either the Aga Khan’s Leopardstown trial winner Hazapour, or Chester Vase winner Young Rascal, a first Derby runner for South African owner Bernard Kantor, who is managing director of Investec.

William Haggas compares Young Rascal favourably with his 1996 winner Shaamit, and, though like Hazapour, for whom Dermot Weld has booked Frankie Dettori, he lacks the wow factor, the same could have been said about Wings Of Eagles this time last year.

I was hoping that Friday’s Oaks might pay for a holiday in Cape Town, but my voucher for the 10-1 offered about Lah Ti Dar after her scintillating debut at Newbury in April went in the trash-can when she was pulled out by John Gosden after a bad blood count.

The fillies’ classic now looks a much tougher puzzle to solve as there are more questions than answers, making it wide-open.

Wild Illusion has the best form in the race, winning the Group 1 Prix Marcel Boussac at Chantilly on Arc Day for Godolphin, and, though she ran well to finish fourth in the 1000 Guineas, Charlie Appleby has always insisted that she’ll be even better when she tries middle-distances.

I would be less optimistic about Magical’s stamina as she is out of a Pivotal mare. She was only two lengths behind Wild Illusion in France and was in the frame in three G1s last season, but I prefer two of Coolmore’s other runners, MAGIC WAND and Forever Together, who finished first and second in the Cheshire Oaks.

Magic Wand enjoyed the rails draw at Chester and breezed around the bends in front the whole way, whereas Forever Together suffered a stop-start run through.

But I was still impressed with the winner – remember Enable took the Roodee trial en route to routing her classic opposition at Epsom – and with or without Ryan Moore she’ll carry my money. Forever Together can make it another 1-2 for Coolmore.

Clive Cox was unusually bullish about Perfect Clarity and she could be the Eachway value, though trainer William Haggas, initially reluctant to run Sea Of Class, seems to be growing in condence daily.

CRACKSMAN, Europe’s champion racehorse last season, was only 85% straight when winning the Prix Ganay in France on his reappearance, and the sky is the limit for him this year.

Epsom holds no terrors for Cracksman after last year’s Derby third and he should see off Hawkbill and Idaho in Friday’s G1 Coronation Cup, and while he will start at prohibitive odds, I can also recommend one at a bigger price, BOOM THE GROOM in the Dash the following day.

The Dash is run over the fastest 1000m in the world and Caspian Prince is trying to win the race for the third year.

However, age could be catching up with the popular veteran, and, though Boom The Groom, is no ‘spring chicken’, he was so unlucky to finish only fourth over the track last time – “we were in front two strides after the post,” claims jockey Robert Winston – that I’ll be steaming in. Why not join me?