A race-riding incident in the UK highlights the competitive nature of racing. 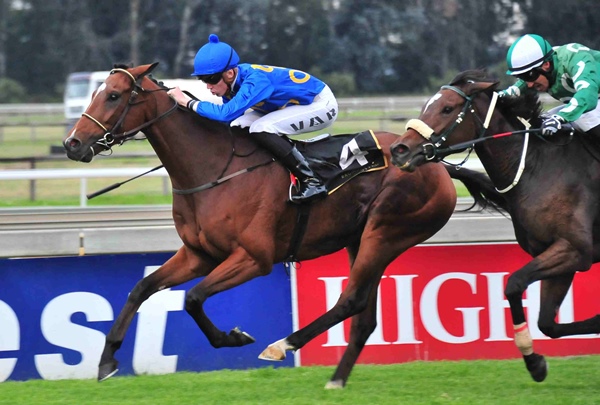 COURSE SUITED. Ali Bon Dubai runs well on the Inside track at Turffontein and looks a banker all bets when he runs in Race 6 today. Picture: JC Photographics

There was an incident in the UK last weekend in which jockeys Jim Crowley and Raul da Silva got involved in a jockey-room altercation. A number of jockeys were not happy with De Silva’s ride in that race.

Da Silva was then accused of attacking Crowley with what the former champion jockey believed was a piece of lead, and was banned for 21 days.

Often punters get the impression that jockeys are all the best of friends and we are having fun out there. That is often the case but people need to understand we are highly competitive, in a stressful job, constantly trying to take one another’s rides and it’s not always fun and smiles. Often you think you should have won the race and another jockey has kept you out wide or has ridden a bad race and you are caught behind him or he keeps you boxed in. What makes it worse are the looks you get from the trainer, making out that you are the guilty party.

So you lose your cool. Most of the time it will turn into a screaming match but occasionally it gets a little more physical.

I’ve had my share of screaming matches but there was one occasion when I lost my cool completely. I was looking to go through a gap and I was screaming and shouting for the other jockey not to leave me in this dangerous situation but he made no attempt to move.

As much as we need to be competitive we also carry each other’s lives in our hands. I did get a little over the top with my reaction and landed up with a big fine.

Sometimes I have tried to intimidate my opponents and they have had a go at me but when I am the guilty party I take my medicine.

Shortly after moving up to Joburg I was involved in an incident with another jockey. We were so far behind the rest of the field I thought I would give him a smack on the toe with my whip. He didn’t take too kindly to that, and he took his whip and smacked me across the back. I was still young at the time but I learned my lesson.

Today we race on the Inside track at Turffontein and we kick off with a Juvenile Plate over 1200m. Once again I cannot stress enough how important the draw is over this course and distance as you jump on the bend.

It looks a two-horse race between Gunston and Whitehaven who I am riding but sadly he has a shocking draw to overcome. For that reason I prefer Gunston but keep an eye on the betting of the unraced horses, especially Mike de Kock-trained Takatul who has already been priced up favourite at 15-10.

Race 2 is a Juvenile Plate for fillies and my first choice is Ulla. She looks the right horse to follow and could be a BiPot Banker.

Race 3 is a Maiden Plate over 1450m even though there are some lightly raced runners who could improve, the two most concerned must be Carbon Atom and Silken Prince, who is my ride. Both are drawn well so you could banker either one in the Place Accumulator.

Race 4 is another Maiden Plate for fillies and mares and in this field nobody stands out so go with as many horses as you want. My selections are Sing And Dance, Bourbon Bouquet and Ration My Passion.

I ride Pachanga who on form must have a chance. My concern is that she is quite a strong filly and with the blinkers on I’m not sure how she will behave. The fact she is drawn No 11 won’t help her chances either.

For the PA go with the first three mentioned and maybe add in my mount but consider the field for the Pick 6.

Race 5 is a Fillies’ Handicap and the horse with the best form has to be Chariot Of Gold. The fact she ran four lengths behind Oh Susanna at level weight in the Grade 1 Woolavington 2000 should prove she is too strong for this field. My concern is that she raced two weeks ago in Durban so therefore in the PA we will include Insignis.

If those two are not good enough for the Pick 6, Cold Cash and Spring Poetry could be considered.

Race 6 is a Middle Stakes where your best handicapped horse should be the one to beat and in this case Ali Bon Dubai and Dromedaris share the top position. However, as Ali Bon Dubai beat Dromedaris by 4.50 lengths and they meet at the same weights, Geoff Woodruff’s runner will be hard to beat. Banker Ali Bon Dubai in all bets.

Race 7 is a fillies’ handicap over 1000m where the draw plays a big part. My first selection is Aerobatic with Lady Lucinda and Macadamia to chase her home. They should be good enough for the PA but for the Pick 6 add in Ilha Da Var and Mademoiselle. Even though the latter has a bad draw, she needs to go in. The same applies to Shifting Shadows.

I ride Rock Pigeon who beat Aerobatic but she is now 9.5kg better off. We will need further improvement to shape here.

Race 8 is a Graduation Plate which should favour your highest handicapped horses. That honour goes to Glider Pilot. He tends to struggle with speed and even though he has placed on this course I’m not sure the Inside track is ideal for him. The next is Royal Crusade but he is coming back in distance after having campaigned over further.

For that reason it might be wise to go very wide. Puget Sound could be an option or even my ride, Full Mast, even though he was well beaten by Glider Pilot last time out. For the PA include some of the horses I have mentioned but for the Pick 6 go as wide as you can afford.

Race 9 is another Handicap but with the De Kock and Randall Simons combination being in such good form, Secret Captain could be a PA banker.

For the Pick 6 try and go wide as there are a number of horses with chances but I think the main dangers are Count Tassilo, Jika, and the horse who possibly has the most improvement to come, Infamous Fox.

Race 10 is a fillies’ handicap and my first choice is Inthepurplerain. The other runner to use as a floating banker with her in Trifectas and Quartets is Piccadilly Square as a good draw will be useful in this field.

I’m riding Snow Path who is badly drawn and held on form but we can only hope.