One needs a boost to run well in big races and a no 1 draw is a huge help. Today’s Turffontein meeting starts on Inside track with last two races on Standside track. 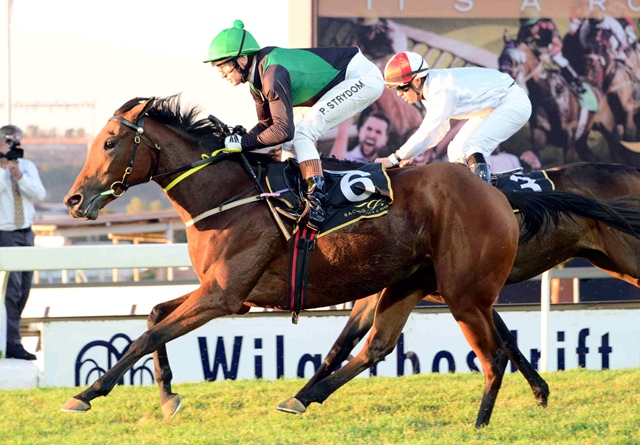 On Wednesday we had the draw for the G-Bets Gauteng Summer Cup which will be run on Saturday 1 December and luckily for me I managed to draw No 1.

I will be riding Sabina’s Dynasty who I get on well with, but you always need things to go your way if you are to win a R2-million race like the Summer Cup and a good draw is a good start.

It’s remarkable where she is now if you consider she only arrived in Joburg last year as a maiden who could not win in Port Elizabeth and now she’s running in the Summer Cup. It’s almost a rags to riches story and hopefully we can win this race. However, we will talk more about the Summer Cup next week.

But don’t forget that today we have two important races on the card – the Grade 2 Dingaans and the Grade 3 Fillies Mile – where we have some top three-year-olds competing and some could go on to bigger things.

This is an interesting meeting in that the first seven races will be run on the Inside track while Races 8 and 9 – Dingaans and the Fillies Mile – will be run on the Standside track. That is because these two races were both originally scheduled to be run on Summer Cup day but were brought forward to help trainers who want their horses to run in these races and the Grade 1 Guineas in Cape Town on 15 December.

On current form the horse that stands out by a distance is National Park. Merit rating is an indication of ability and National Park is way in front. The two unknown horses are Hawwaam and Reach For The Line who finished first and second respectively on debut in the no-whip race. Hawwaam has a high merit rating for a horse who has run once so for me, the winner will come from National Park, Hawaam or Reach For The Line.

It would probably be a bit of surprise if a maiden or one-time winner should beat a horse like National Park who last time won a Grade 3 race with consummate ease. So my advice is banker Banker National Park in all bets.

I ride White Lightning who has the lowest merit rating in the field so I would be happy to earn a stake cheque.

The other feature is the Fillies Mile and on this occasion just about every runner has a winning chance. My main selections are Return Flight, Ronnie’s Candy and Celtic Sea. Those are the three horses who need to be included in the PA but for the Pick 6 you could consider all of Ghaalla, Storm Destiny, Isle De France, Viv Va Pi Pa, and my ride, Railtrip. Railtrip ran disappointingly last time but on her best form she has to be a contender.

Now we go back to the Inside track and start from Race 1. We begin with a Maiden Plate over 1000m which is around the turn. This is not the strongest field on form but my first selection is Ottawa from Cizeron and Brass Tax.

Race 2 is a stakes race over 3000m where your best merit-rated horse should come out on top but in this race the form does not match the weights and therefore anything can win. My first selection has a bit of value and that is Village Deep. The 4kg claim over this distance can make a difference.

His dangers could be Mighty And Magic and Tapenzee.

Race 3 is another handicap with my selections being Empress Valley, Serendipity and Angelic Appeal. All three should be included in the Place Accumulator.

Race 4 is another Handicap where many horses have chances. My main selections are Ragoon, Master Magic, Volcanic Sunset and Corrido. All need to go into the Pick 6 but for PA you probably need only three of those mentioned.

Race 5 is another Handicap where my first selection is Divine Odyssey who ran in a feature last time. He was slow at the jump and maybe the extra distance will suit him. The dangers are probably The Rising Legend and Bold Viking but as both are normally ridden conservatively, from slightly bad draws, it might make the race easier for Divine Odyssey I’m making him a PA banker. If you don’t want to banker him in the Pick 6 consider the other two mentioned and possibly Splendid Garden.

Race 6 is another handicap with my main selections being Quebec Queen and Ossetra who are my PA horses. For the Pick 6 other inclusions are Ruby Dancer, All I Got and Sammi Moosa. I ride Until Dawn whose last two runs have been disappointing so I’m hoping she comes back to her best.

Race 7 is another handicap and while many have chances, none stands out. So, for the PA include Manhattan Cocktail, Wildlife Safari and O Lucky Man. For the Pick 6 you could easily include the field.

I ride Artemisia who won impressively last time as she came from the tail of the field to win impressively in the short straight. Her earlier runs were not that good and as she picked up a big penalty it will make things tough to win again.