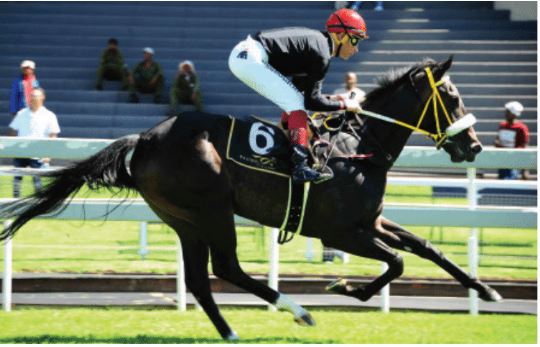 BUBBLY CHANCE. Gin Fizz is regarded as the best bet on the Turff ontein card tomorrow and should win Race 4, the Ruffi an Stakes over 1000m. Picture: JC Photographics

A group of seven minor feature races make tomorrow’s card at Turffontein a great opportunity to look at the form of some runners before they move into the more “serious” Graded races.

Topping the card are the Listed Derby and Oaks Trials over 2000m on the Standside track.

The Grade 2 SA Derby and Grade 2 Wilgerbosdri SA Oaks will be run over 2450m on Saturday 30 March and while these minor races can be seen as a curtain raiser to the main affair, many of the key protagonists will not be in action tomorrow.

Having said that, Legal Eagle, one of the best horses in the country, won the Derby Trial and the Derby, so it can be done.

Both Trial races are handicaps so it explains why Mike de Kock has chosen to run the filly Storm Destiny in the Derby Trial.

With a merit rating of 95 she is the top-rated runner, even among the colts, and this daughter of Dynasty heads the weights with 61kg.

She ran on nicely in the Grade 1 SA Fillies Classic over 1800m last Saturday so this 2000m should be right up her street.

However, De Kock also saddles Protea Paradise who was a very impressive winner of his last race over this course and distance.

It was his first run back after geld-ing and he raced clear of his opposition to beat Senor Lizard by 2.40 lengths.

He is drawn No 14 which is obviously not ideal, but over 2000m at Turffontein there is a 600m back straight before the horses reach the turn so jockey Gavin Lerena will have plenty time to place him.

Of course, by having the fi lly as top weight, Protea Paradise comes into the race carrying a handy 58kg.

His last race was an Assessment Plate and when he beat Senor Lizard Protea Paradise was well weighted. This time Senor Lizard is 4.5kg better off and on paper, that is enough to reverse the form, especially as he jumps from No 4 draw.

Nevertheless, Protea Paradise was not under any pressure to win that race and appeared to have quite a bit in hand, so should confi rm the form.

The Oaks Trial looks more open but there was a lot to like about the performance of Pre y Border in her last run over 1800m.

She was fi nishing strongly and with a light weight of 52.5kg on her back could provide good value for punters.

David Nieuwenhuizen’s charge takes a jump in class but she loves this track and trip and should ward off a challenge from lightly raced Bize and Sean Tarry-trained Satin Slipper and African Daisy.