Durban July: Flood of bets for Do It Again to do it again

Do It Again’s odds have been slashed to 8-1 from 15-1 a week ago, when the final field for South Africa’s most famous horse race was announced. 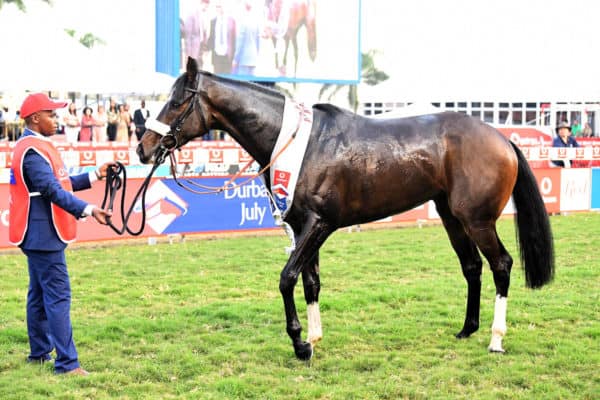 Do it Again, winner of the 2019 Durban July, is again a big favourite. Picture: Anesh Debiky/Gallo Images

Punters have been piling money on Do It Again to win Saturday’s Vodacom Durban July for an unprecedented third time.

Do It Again’s odds have been slashed to 8-1 from 15-1 a week ago, when the final field for South Africa’s most famous horse race was announced. That represents a landslide of big bets with bookmakers and comes after the horse impressed during public training gallops at Greyville racecourse on Thursday last week.

A wide draw of 14 out of 18 hasn’t put big wagerers off the six-year-old gelding.

Another factor in the newfound enthusiasm for Do It Again has been stable jockey Richard Fourie’s choice of him over trainer Justin Snaith’s other three runners – defending champion Belgarion, Crown Towers and Nexus. Fourie had first choice of mount as he goes for three July wins in a row.

Last year’s runner-up Got The Greenlight remains the race favourite at 5-2, having shortened marginally from 28-10 after the field unveiling. Second favourite Linebacker has edged out from 7-2 to 4-1 and Rainbow Bridge from 9-2 to 5-1.

Do It Again won the Durban July for Snaith in 2018 and 2019 – the first time with Anton Marcus aboard and the second with Fourie. In 2020, Fourie opted for Snaith charge Belgarion, who won the race and denied Do It Again (third with Marcus) three Julys in a row by just 1.05 lengths.

50-1 and upwards the others