There are a number of races on today’s Vaal turf programme that form students can really sink their teeth into, including the two R100,000 topliners. 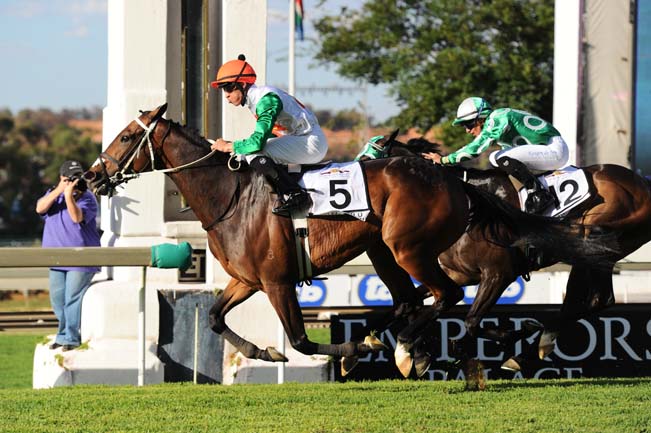 Race 7 is a MR 86 Handicap over 2000m and, although there are a few horses in the line-up with winning credentials, it might pay Pick 6 punters to bank on Wallace Tolmay-trained Africain.

This Jet Master gelding only started his career as a four-year-old in January this year and has had just six starts. He has not finished unplaced and has recorded two wins, the most recent over the Turffontein standside 2000m where he beat Master ‘N Commander by a long head.

Master ‘N Commander went on to finish third in his next start before winning his latest outing on the Vaal sand. And five other horses from that race also placed next time out.

Africain is well drawn in No 2 stall and will be partnered by Sherman Brown, who was aboard for that Turffontein win.

Antarctic Call finished fifth that day and meets Africain on 5.5kg better terms, which in theory should bring them much closer together, but Africain is holding form well and should confirm the form.

Two other horses have finished ahead of Antarctic Call in recent weeks. Leeuloop Jet (1kg worse off) finished just over a length in front of him in a race won by Deo Juvente over 1800m on the Turffontein inside track in June, while Inala got home 3.75 lengths in front of him when they finished fourth and fifth behind Scent over 2000m last month. All four come into the equation when looking the runner most likely to chase Africain home.

However, that honour might go to Jezero, another consistent sort but rested for two months.

He shed his maiden certificate with a good win from Respectable Ruler over this course and distance in April, form that has been franked, and went on to finish second twice running over 2600m and 2400m. He should give a good account of himself with Weichong Marwing aboard.

At best all six of the runners (Poderosa is scratched) have the ability to shape in the other R100,000 race on the programme, Race 2 an FM 87 Handicap over 1200m. Honours could go to Kwinta, a four-year-old filly trained by Stanley Ferreira and to be ridden by Piere Strydom.

She also has scope in only her sixth career starts. Her form is good, her only unplaced run coming against stronger in the Gauteng Fillies Guineas, and she was impressive in her most recent start, when making all the running to beat Lady Al by 4.50 lengths over this course and distance.

That was her first run in blinkers and she could well blossom into a feature-race contender this season.