CATCH ME IF YOU CAN. Captain America keeps galloping powerfully to the line to capture the Rising Sun Gold Challenge at Greyville

Brett Crawford’s big-name horses are cur­rently unstoppable and Captain America gave the Cape trainer his fourth Grade 1 title of the year when winning the R1-million Rising Sun Gold Challenge over 1600m at Greyville on Saturday.

Crawford had saddled Edict Of Nantes to win both the Investec Cape Derby in January and the Daily News 2000 a week before the Gold Challenge – the same day he won the Woolavington 2000 with Lady Of The House.

Captain America is one of Crawford’s three entries for the R4.25-million Vodacom Durban July over 2200m at Greyville and was sixth on last week’s Durban July log. The six-year-old Captain Al gelding secured his invitation to participate in the race every owner, trainer and jockey wants to win with a facile win in his trial.

Crawford’s other entries are Edict Of Nantes, who tops the list of probable runners, and Nebula, who was a borderline case on Sat­urday morning and did not help his chances by finishing second last as favourite in the Cup Trial.

The Gold Challenge looked tricky on paper but most of the talk leading up to the race was about Candice Bass-Robinson’s Marinaresco. The Silvano geld­ing went through the stalls at 26- 10 with Captain America next on offer at 5-1. Both Trip To Heaven, the horse who was demoted from first to second in the Gold Chal­lenge last year, and top-class filly Bela-Bela drew quite a bit of sup­port, starting at 61-10 and 72-10 re­spectively. Dual Guineas winner Janoobi drifted from an opening call of 7-1 to 21-2 and there was 12-1 and better on offer about the other runners.

Jockey Piere Strydom took Janoobi to the front from a wide draw, with Corne Orffer electing to follow him through.

Orffer soon had Captain Amer­ica beautifully positioned on the rail and tracking the leader, who set a solid pace. Marinaresco was in mid division, about five lengths behind the leader, with Bela-Bela near the back, ahead of stable­mates Trip To Heaven and French Navy, who never looked comfort­able in first-timer blinkers. Craw­ford’s other runner, Sail South, was last.

It took only a couple of strides after Janoobi whipped the field into the home straight for Captain America to hit the front and the race was all over bar the shouting. Crawford’s runner cantered home to win as he liked by 1.50 lengths.

Brazuca gave chase with Sara­toga Dancer, who stuck to the rail, but neither had any answer when Trip To Heaven, shifting in, and Bela-Bela swept on by about 150m out. They lunged for the line with Trip To Heaven taking second by a neck. Sail South raced straight all the way home and finished fourth, 0.75 lengths further behind.

Orffer said afterwards: “He’s a phenomenal horse. I know this horse, when he quickens up and he gets a few lengths on them he’s a hard horse to get to. He’s a stable favourite.”

Crawford said: “He’s been the most amazing horse to train. A more genuine horse I don’t think you’d find in training. It’s re­ally satisfying to see him pick up his second Grade 1 win (after the Horse Chestnut Stakes in 2015). He’s never quite got this track right but he put that to bed today. He deserves all the accolades.”

It was soon apparent in the straight that Marinaresco would not beat Captain America and jockey Bernard Fayd’Herbe put the crop away to just go through the motions.

Trainer Candice Bass-Robin­son said yesterday morning: “He was fine after the race. I think he just raced too handily. We were trying to get him closer to the pace and they went hard on Sat­urday so he was always travelling out of his comfort zone. His big­gest asset is his turn of foot, but he couldn’t find it because they were travelling so hard. Ideally we would have done better coming off the back. We’ll go back to drop­ping him in.

“That said nobody could have beaten Captain America!”

It was also a great July prep for gallant grey filly Bela-Bela, who trainer Justin Snaith believes is best at 1600m, while last year’s July winner The Conglomerate, who got into the field after Deo Juvente was scratched, ran a fair race in sixth.

Other July entries in the Gold Challenge included Saratoga Dancer and Brazuca, who faded to eighth and ninth respectively, and dual Summer Cup winner Mas­ter Sabina, who never quickened in his debut for Snaith but would have found the distance too short.

Many considered it a two-horse race with Nebula going through the stalls 22-10 favourite and Black Arthur on offer at 26-10. Elusive Silva was next in the mar­ket at 5-1 ahead of Master Switch (17-2).

In the end it was Elusive Silva who did best in a thrilling finish. In the process he and his stable­mate booked a berth in the July.

Crowd Pleaser took an imme­diate lead with JP van der Merwe making the most of the three-year-old’s light weight to set a slow pace. Celtic Captain was next on the rail with Master Switch on his outside. Nebula and Black Ar­thur were next followed by Elu­sive Silva and Go Direct. Trophy Wife and Royal Badge were chas­ing.

Jockey Richard Fourie, riding with a black eye after being head-butted by a horse at stables earlier in the week, wasted no time press­ing the button on Elusive Silva and he edged past Black Arthur about 350m from home, hanging in un­der pressure. But Crowd Pleaser was not going down without a fight and a ding-dong battle en­sued. It was heads up and heads down as they swooped towards the line and the judges gave the verdict to Snaith’s runner by the shortest of short heads. Black Ar­thur kept running strongly and finished third, only 0.50 lengths further back.

Fourie had told Snaith that Elusive Silva would be his pick of the stable’s runners in the July be­cause “he ticks all the boxes – he’s a big, strong horse, he can quicken and that’s what you want”.

Royal Badge did best of the July entries in fifth, with Trophy Wife staying on for sixth a head further back. Nebula and Master Switch finished at the back of the field.

Popular banker Just Sensual obliged in the Grade 1 Tibouch­ina Stakes over 1400m, power­ing home to beat Nightingale by 0.50 lengths. The Joey Ramsden-trained filly was ridden by Anton Marcus in an ultra-promising tri­al for the Garden Province Stakes on July Day.

Robinson was thrilled with Nightingale’s run: “She ran a cracking race, running wide all the way, so she was unlucky, re­ally.”

She added: “We haven’t really made decisions yet but I’m lean­ing towards running her in the July.

“She’s a big filly so she should hold her own quite easily in the rough-and-tumble of the July and she’ll be lightly weighted.”

“She was travelling quite nicely but before the turn dropped the bit completely and never picked it up. Maybe she got a clod in her eye?

“I think she’s going to retire now. She’s never really grown, she’s the same size as she was as a three-year-old, and the other fil­lies have matured past her.”

Kenilworth racing was called off after Race 5 but jockey Aldo Domeyer continued with his ex­cellent form, riding three winners and finishing a close second in an­other race. 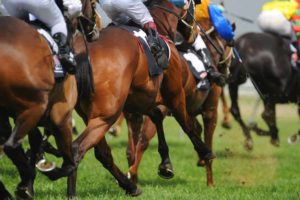 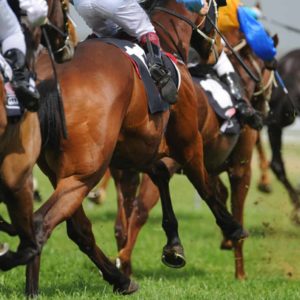 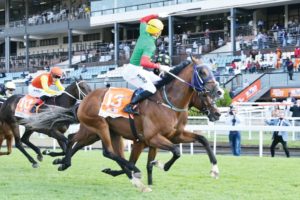 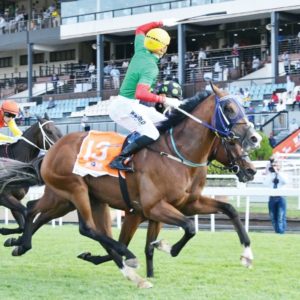