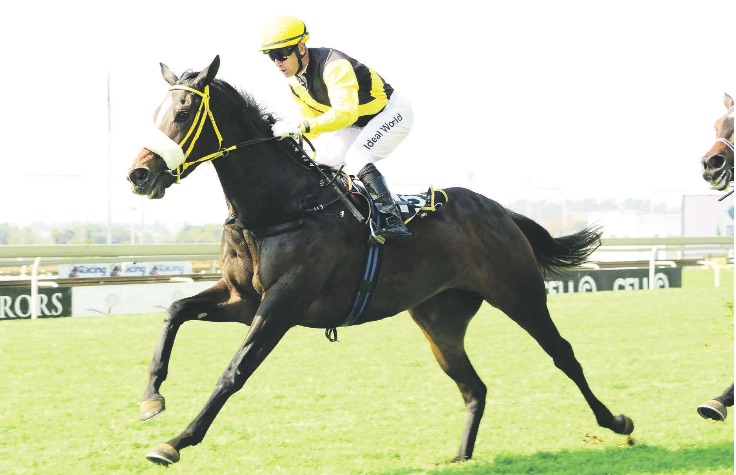 BRILLIANT WIN. Cascapedia wins her debut well back in April. The Mike de Kock-trained filly looks sure to follow up in Race 7 at Turffontein tomorrow. PHOTO: JC Photographics

Trainer Mike de Kock could take the final Double at tomorrow’s Turffontein race meeting, with debut winner Cascapedia resuming after a four month rest in Race 7 and Onamission set to live up to her name in Race 8.

In fact, the stable has six runners at the meeting and none should be left out of any bets because all have decent winning chances. Best of the others is arguably Quick Glimpse in Race 2.

Quick Glimpse was backed as though the result was a formality in her debut, but the Fastnet Rock filly showed signs of inexperience, hanging in the final 400m and staying on for third behind Phillydelphia over 1000m in August. Anthony Delpech takes the ride again on the Mary Slack and Michael Javett – owned filly and she could well recoup losses.

The ruling champion jockey will also be aboard Cascapedia, who was impressive in her debut when running on from nearly seven lengths back after a slow start to beat Knysna Rose over 1400m. The runner-up won next time out and has finished second three times running recently, while many of the horses they beat home have run well subsequently.

Cascapedia tries 400m further now, but should stay the distance and the only thing against her is a wide draw of No 11.

It might pay dividends to banker her in Quartets, with Stunned and Man At War for second and a few horses for third and fourth.

St John Gray’s charge Stunned has been well beaten in third in his two starts since a layoff, but the stable is in fair form and the gelding should get much closer.

At a glance Sean Tarry-trained Man At War’s form is erratic but ultimately only two runs count and those are his maiden win second time out and a good third be- hind Bizjet over 1600m last time. He has scope for improvement and will make his presence felt.

A wide draw will also be a ready excuse for Onamission if she doesn’t win the 1400m eighth race, but she seems to have loads of ability and even that disadvantage should not stop her beating this eld, which lacks depth.

She followed a fair debut with a maiden win and has not been beaten far in her last two starts, including a fourth behind Folk Dance. Outlander, who finished behind her won her subsequent race and Onamission need only run to that level of form to score her second win. The danger is Lebanese Tractor, and they look good for Swingers and Exactas.