Race is ‘tailor-made’ for Legal Eagle

The dual Horse of the Year has finished second on his last two attempts. 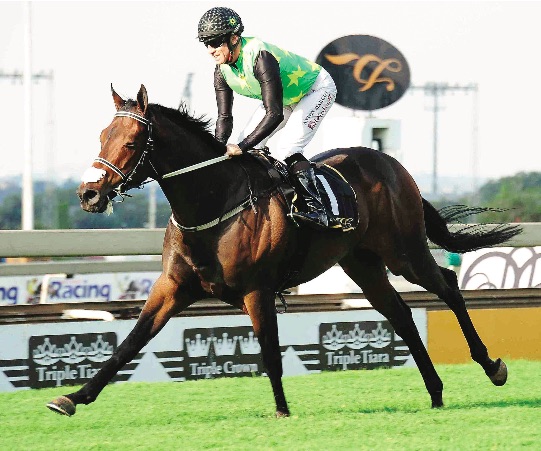 Legal Eagle, pictured, the 4-1 favourite for the Sun Met celebrated with GH Mumm on Saturday, is “a tougher horse” this year than on his previous two attempts to win the Cape’s premier race.

The dual Horse of the Year has finished second on his last two attempts, first to the mare Smart Call in 2015 and then to Whisky Baron last year, but Tarry is happier in the days leading up to the race than he has been in the past.

“Everything’s gone well, most of the hard work is done and now everything must go smoothly in the next couple of days,” he said yesterday. “Legal Eagle seems a bit more solid this year, more battle hardy. We haven’t had the soundness niggles – not that there were any big issues.”

Tarry has often said that sixyear-old Legal Eagle is “sublime” over 1 600m but slightly vulnerable over the 2 000m of the Met, but pointed out that the champ is one of only two horses in the field to have won at the highest level over this distance and further.

The other is Vodacom Durban July winner Marinaresco, and Race is ‘tailor-made’ for Legal Eagle ‘Exec cannot work for ex-employer’s rivals’ THE SUN MET Legal Eagle beat him home by 2.5 lengths in the Met last year.

“Legal Eagle has won two Grade 1s over the distance and further, so I don’t feel the distance is against him in any way,” said Tarry.

This race looks tailor-made for the brilliant Legal Eagle and his many fans are hoping he’ll break his Met hoodoo on Saturday.

There is going to be a massive Quartet pool on the race, so we asked Tarry who he’d put in.

“I haven’t really gone through the race, but at the time of accept ances I thought Marinaresco has had a beautiful preparation and is probably the main danger. The three-year-old Oh Susanna is very nicely weighted and has a lovely pedigree – Street Cry fillies that are good are often really good.