On Super Saturday, Mike de Kock reflects on glory days – past and future

The marquee events this Saturday are the Group 1 Al Maktoum Challenge on dirt – a prequel to the World Cup race itself – and the Group 1 Jebel Hatta, the turf highlight. 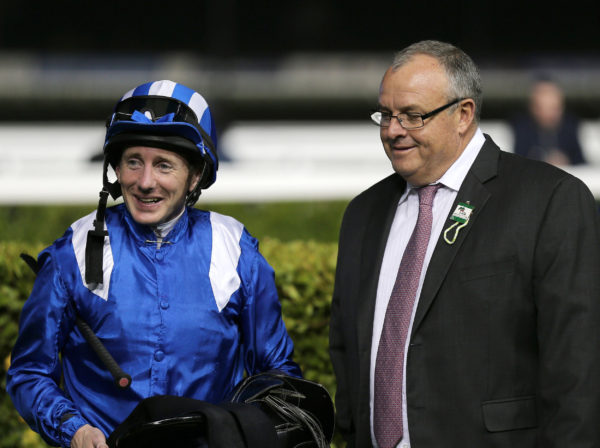 Jockey Paul Hanagan speaks to Mike de Kock during the first Longines Carnival Meeting at the Meydan Racecourse in Dubai some years ago. Picture: Getty Images

Super Saturday in Dubai has arrived, with the World Cup “dress rehearsal” staging its usual line-up of elite races at Meydan racecourse that mirror the programme of the world’s richest race meeting in three weeks’ time.

The marquee events this Saturday (6 March) are the Group 1 Al Maktoum Challenge on dirt – a prequel to the World Cup race itself – and the Group 1 Jebel Hatta, the turf highlight.

The Dubai Carnival has had a lot less fanfare than in previous years. The pandemic wrecked the climax in 2020 and, since then, travel restrictions have curtailed the international adventuring of many top trainers around the world.

For South African racing fans, who once revelled in the exploits of our top stables in the desert, the glory days look largely over. For now.

Our Dubai champion, Mike de Kock, has run a very low-key campaign by his standards in 2021, so there’s been little to grab the attention “up north” other than remote punting opportunities.

De Kock gave a lengthy interview to Laura King of thoroughbredracing.com this week in which he spelled out the reasons for his diminished role in Dubai. He cited the well-known problems of South African horses simply getting to Dubai – due to the European Union’s stringent export-import protocols, which mean horses take six months to get from Cape Town’s quarantine facility to De Kock’s Blue Stables at Meydan.

The EU rules, tightened in 2013, have nothing to do with Covid-19. It’s African horse sickness the pen pushers in Brussels are ostensibly paranoid about – even though South Africa has satisfied all conditions for a lifting of restrictions.

De Kock went from saddling 16 winners in the UAE in 2011 to just one in 2020 and King described Blue Stables as “something of a sad sight” in 2021. “Now there are just a couple of heads poking over the doors and the trophies in the office date back a few years,” she wrote.

The trainer ranked No 12 in the world is making new plans, however, and hints that he may be back in full force in Dubai in 2022.

His plans include using Dubai as a base from which to send horses to Australia, where his son Mathew has entered into a training partnership with successful trainer and former jockey Robbie Griffiths.

“We’re hoping to revive Dubai again, sort of 2022, and look at moving horses between here and Australia, with Mathew down there,” he told King.

“That’s something we’ve set our sights on. There’s no point in leaving horses here in the summer, not earning, when the stakes are as lucrative as they are in Australia. I think it’s something which needs investigating. We keep trying new things. What else can we do?”

De Kock also mused on the possibilities of Brexit allowing South African horses to bypass EU red tape, with exports being routed directly and rapidly through the UK instead of having to first spend idle months in Mauritius.

De Kock’s handful of runners at Meydan this season have included two Argentinian-bred three-year-olds by his erstwhile “war horse” Asiatic Boy, who was runner-up to the great American galloper Curlin in the 2008 World Cup.

One of these, Effectif, is De Kock’s sole representative on Super Saturday, contesting the Listed Al Bastakiya over 1900m on dirt. The colt races in Sheik Khalifa’s yellow and blue silks that are so familiar to South African racing fans from the deeds of Igugu and Bold Silvano, among many others.

The chestnut has raced twice without placing, but has shown signs of coming to hand.

The Dubai Racing Club (DRC) official website preview of Super Saturday reminds us that the 2000m Al Maktoum Challenge Round 3 has on three occasions over two decades been won by horses that went on to claim the World Cup: Dubai Millennium (2000), Street Cry (2002) and Electrocutionist (2006).

Frankie Dettori triumphed on all three of those in the Cup – all for Godolphin and trainer Saeed bin Suroor, back when his association with that team was fast and all-conquering. Dettori was estranged from his former employers for some time in recent years, but things were patched up recently and the famous jockey has had a very successful 2021 stint in Dubai with the old team.

Dettori does duty for Godolphin aboard Dubai Mirage in Saturday’s Challenge and the DRC preview says: “Competing at his first Meydan Carnival, the four-year-old gelding has finished second on both local starts, in turf handicaps over 1600m and 1800m.

“Being a gelded son of Dubawi, he certainly looks worth trying on the dirt surface and did lose his maiden tag on his sole all-weather appearance in Britain.”

Bin Suroor says of Dubai Mirage: “We wanted to give him a chance on the dirt. This will be a very tough race, but he has been going nicely at home.”

For up-and coming trainer Fawzi Nass and jockey Adrie de Vries, Salute The Soldier was a Super Saturday winner last year, in the 1600m Group 3 Burj Nahaar. The six-year-old gelding bounced back to winning ways in the 1900m Group 2 Al Maktoum Challenge Round 2 just over three weeks ago.

De Vries said: “That was a new trip last time and he stayed well, suggesting the extra distance will not be an issue. He seems in great form and it is exciting to, hopefully, be involved with a genuine Dubai World Cup prospect.”

Second on that occasion to De Vries’s mount was Thegreatcollection, who was also runner-up in the 1600m Group 2 Al Maktoum Challenge R1 when Salute The Soldier was third. To be ridden by Pat Dobbs, the seven-year-old gelding is trained by Doug Watson.

Trained by Satish Seemar for Nasir Askar, Secret Ambition was runner-up when attempting to defend his crown in the Group 3 Jebel Al Mile. Most recently, he won the 1600m Group 3 Firebreak Stakes, at the carnival, a month ago.

Seemar also saddles Quip; Saltarin Dubai, who was victorious in the 1950m Listed Jebel Ali Stakes on his most recent start a month ago; and Roman Rosso.

Salem bin Ghadayer is seeking a third consecutive victory in the race and fourth in five years. He saddles Firnas, Tailor’s Row and Hypothetical, runner-up behind Secret Ambition in the Firebreak Stakes before recording a second 1600m dirt Meydan handicap success a fortnight ago.

Bin Ghadayer said: “All three are in good form and have been running well, but this is, obviously, a tough race. We hope they all run well and can give a good account of themselves.”

Super Saturday gets underway at 2pm South African time, with all the action on Tellytrack (DStv channel 249) and full betting facilities on TAB.