Blinkers - and a positive ride by jockey Weichong Marwing - did the trick for Bouclette Top, who finally got back into the No 1 box after a year in the wilderness in the R150,000 Drum Star Handicap (Listed) over 1800m at Turffontein on Saturday. 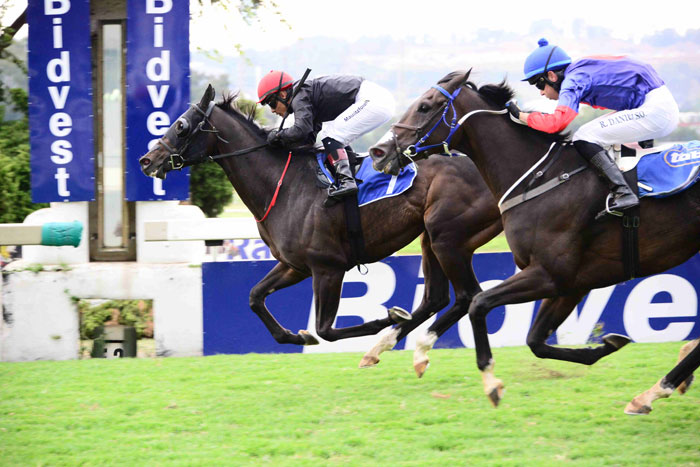 The race is one of the official preparatory races for the HF Oppenheimer Horse Chestnut Stakes over 1600m on SA Classic Day on 28 March and the President’s Champions Challenge over 2000m at the end of next month. Bouclette Top, who has always been highly regarded by trainer Alec Laird, is among the entries for the Horse Chestnut Stakes.

Bouclette Top, backed from 3-1 in the morning to go off 18-10 favourite, was soon in front and gave Marwing an armchair ride, setting a steady gallop from Rushmore River and Assegai. Lockheed Jetstar and Tiger’s Retreat were followed only by Tribal Dance and Brooks-Club.

Marwing sat stock still nearly all the way down the straight, giving his mount only one reminder about 100m out, and they won confidently by a narrowing 0,50 lengths from a fast-finishing Tiger’s Retreat. Lockheed Jetstar also ran on well and was another 1,25 lengths back in third place. Marwing said: “I rode the horse in the week for Alec and his work was exceptional. He’s been a bit of a tricky horse – he’s a bit of a thinker, so he does need the blinkers.”

Marwing also pointed out that the connections had been expecting Bouclette Top “to just about win” every time he raced but that he had been “turning it up” halfway through before the blinkers were added.

“He’s got a bit of class on his side – he’s proven that in his earlier form when he’s run behind some top horses. With respect to the opposition, all he needed to do was turn up on that form and it was going to be hard for them to beat him.

“I didn’t really want to go to the front but he was a little bit keen and that played in my favour because I was allowed to dictate. I gave him a breather (in the straight) and knew when I asked him he was going to quicken away nicely.

“This was a win full of merit. He concentrated the whole way. He came away and won a good race and he’ll get stronger from this,” said the jockey. “Hopefully he takes this win well and gets a lot of confidence from it.”

It was the first of two winners for Marwing and Laird, who were also on the mark with Grand Epoque, who drifted from 16-10 to 33-10 in Race 9 over 1450m. Midfield through the turn, she flew late with Ladies Club to win by a head with 12-1 shot Pied Piperess another 0.65 lengths back in third. Jockeys Anthony Delpech and Gavin Lerena also rode two winners apiece, while Mike de Kock had a double.

At Kenilworth on Saturday, Tevez won the 1000m Pinnacle Stakes, overtaking Normanz 100m from the line and winning well from Promicing Polly, who finished like an express train and was only 0.40 lengths behind the favourite at the line.

It was a great prep run for the Computaform Sprint at Turffontein next month. He will have one more run before flying into Joburg for the Grade 1 1000m race on 25 April.There were a few other smart efforts at Turffontein on Saturday.

Here’s a recap of what happened:

Race 1: 15-10 favourite Angelus Bell (Sam Mosia), trainer Brian Wiid’s only runner at the meeting, improved in his second run after being gelded and led from start to finish to win impressively from Agile Combat, who was backed at long odds and was last coming into the straight. Wiid enjoyed a good 24 hours, with a winner and a second placing from his two runners at Greyville on Friday night.

Race 2: 16-10 favourite Kemal Kavur (Donavan Mansour) made no mistakes second time out after an ultra-promising second on debut and holds a fast-finishing first-timer King’s Drive at bay by 0.75 lengths. Kemal Kavur, a good-looking horse who will improve over further, was the second winner from Cape-based trainer Vaughan Marshall’s small team of horses raiding on the Highveld.

Race 3: Captain’s Song gave Delpech his sixth win of the weekend after a five-timer at Greyville on Friday night. The filly, with Delpech up for the first time, enjoyed every moment of the 1450m race and scored an overdue win in her third career start. Still immature, she cruised home by seven lengths from Archetype, a clear second, and gave De Kock the first of two winners.

Race 4: Favourite Captain America raced in snatches and only managed a nine-length third behind 8.50-length winner Paterfamilias (8-1), who was given a patient ride by Delpech after starting slowly. The only Mike Bass runner, he finished strongly from second-last in the straight to tackle the leaders 300m out. He went on by at the 200m marker and drew smoothly away to beat Sovereign Mint.

Race 5: An exciting finish and a 1-2 for the De Kock stable team as Randall Simons steered Tiger Territory (11-2) on the outside to a narrow win over his better-fancied, Delpech-partnered stablemate Moofeed (15-10), with long-time leader Greasepaint (Piere Strydom) grinding it out with them to finish another head back in third. “I couldn’t split them beforehand,” said assistant trainer Mathew de Kock.

Race 6: Yet another predictable result as yet another favourite as Erico Verdonese-trained Lions Emblem (28-10) beat second-favourite Supertube by 1,75 lengths. He scored under a beautifully timed ride by Gavin Lerena, who brought him to the front 300m out and kept him going well. Supertube ran on well but got into full cry too late. The Barbadian was over five lengths further back in third.

Race 7: No 2 for Lerena after he set Geoff Woodruff-trained Loco Por Ganar alight from the back of the field to lead just over 100m out and win going away from pacemaker O’Brien, who ran a brilliant race following a five-month rest to finish only a length back in second. Gasoline, the 5-4 favourite, was well there until inside the final 200m but then ran out of gas and plodded into fifth.