Move to Turffontein is ideal

Silver Scooter can get punters off to a good start in Race 2. 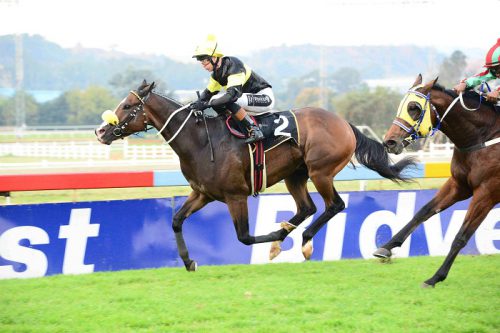 SPRING FOR SPRING. Spring Steel is Piere Strydom’s selection to win the Grade 3 Spring Spree Stakes over 1200m on the Inside track at Turffontein today.

It’s that time of the year again when we come out of the winter months into spring and unfortunately the Vaal track has taken quite a beating due to the dry weather so the decision to move all but the Grand Heritage meeting on 30 September to Turffontein for this month is the right thing to do.

It definitely can’t be good for horses to race on a track that almost looks like a ploughed field. At the Vaal on Thursday the track condition created lots of problems because in the past there was always a false rail on the inside.

However, it was taken away on Thursday and that little strip on the inside of where the rail had been was the best going. Naturally, everyone wanted to race there as it gave you an advantage.

People might have thought the jockeys were stupid because they kept going in and getting blocked but that tends to happen when one small section is good and the rest is bad.

I’m sure there will be a response that most of the other countries in the world don’t race with false rails but the majority of international tracks have very short run-ins so by the time you enter the straight you are already making your move, looking for a clear run and getting your horse going.

At the Vaal with a 1000m straight can you imagine what would happen if you pulled your horse out and started making your move as you turned for home.

The correct way to ride at that course is to stay where you are and keep your cover for as long as is practical and that is why you have to move late and if everybody heads for the same section of the course it tends to cause al lot of trouble.

That is why I cannot say enough about Gauteng needing a Polytrack. It would help us through the winter and be kinder to the horses. Also in summer with the heavy rains it would stop us losing so many meetings, except when lightning comes into play.

One also has to add that the fact the Classic track could not be used did not help the situation either.

On the positive side Durbanville will open shortly after having been renovated. According to the Western Cape jockeys the track is less undulating, the sharp turns have been smoothed out and the track cambered on the bend. That will make it a lot better for racing.

Durbanville was always very draw biased but it might even things out a little with the changes.

Today we are racing on the Inside track at Turffontein and I don’t want to sound like a broken record but the draw is important at this track.

Race 1 is a workriders’ race with nothing really standing out. The main runners look to be Lady Defender and Ma Amour.

Race 2 is a very tricky handicap even though it’s a small field. The horse I’m leaning towards is Silver Scooter who could be worth a bet. Unfortunately horses like Elevated and Lineker have shown ability. They could find their best form and beat him.

Race 3 is another small field but quite competitive. I’m leaning towards Guns And Roses who just seems to be improving. The danger looks to be Runalong.

For the Place Accumulator Guns And Roses is consistent and could be a banker in a small field.

Race 4 is a difficult Maiden Plate as most of these horses are unraced or had only one run. On this track experience helps with a good draw also being an advantage. Therefore I’m leaning towards All Eyes On You.

Unfortunately she was reported to not be striding out last time so there are others who might need to go in. Keep an eye on the betting for any big movement on the unraced runners but you might also need to consider La Girona and Aerobatic.

For the Pick 6 if you put all the raced horses in you will definitely have the first leg.

Race 5 is a stakes race where the best handicapped horse has an advantage but on this occasion Save The Rhino could have the advantage on form.

He has beaten highest rated horse Cool Chardonnay and is a possible PA and Pick 6 banker. If Save The Rhino is not your banker then consider Cool Chardonnay, Storm Warning and Tendre who seems to be on the up.

Race 6 is a competitive fillies’ handicap but on the form I worked out Lady Starlett comes out on top. She has a tendency to start slowly but maybe this 1200m up the hill could work out well for her.

The unknown horse is Alileo as she has had two starts and won both so can still improve.

Those are my two for the PA but for the Pick 6 consider Spring Wonder and Shivering Sea. Another possible runner is Myfunnyvalentine who may have needed her last run and jumps from No 1 draw.

I ride Secret Star who is held on form and also I find on this Inside track that she battle to cope with the turn. But I’m hoping as she’s got older she has learned to handle it.

Race 7 is the Grade 3 Spring Spree Stakes over 1200m where the start is right on the bend.

This is a very competitive race and every horse on form has a chance so you could easily include the field. But taking form and draw into account my selections are Spring Steel, Will Pays and Maximizer.

I also rode Romi’s Boy in his last start. He was out at the weight and only got beaten 1.60 lengths and for me they are the main protagonists.

I ride Angel’s Power who should enjoy this track and distance. We had no luck last time but hopefully there is a wide false rail.

There are others with chances on form but they have shocking draws.

Race 8 is a handicap but two horses have raced in features and they are Varimax and Well Connected. Both ran in the middle of the KZN season against the best horses and both ran off shocking draws, which makes me think they will fight out the finish.

I ride Ideal Secret who beat Manitoba last time who in turn took many more runs to win a race. I can only hope for a place or massive improvement.

I need to point out that even though I’m getting a lot of rides from the Azzie yard I go according to what I get offered. I do not have the first choice. In this case if I did have the choice I would have gone for Varimax.

For the PA we will consider banking Well Connected in a small field but for the Pick 6 include Varimax.

Race 9 is a Maiden Plate with Penny From Heaven having the stand-out form. She should be a PA banker and probably a Pick 6 banker with the only dangers being the unknown unraced horses.