Jockeys delighted with the repairs done to the Vaal Classic track. 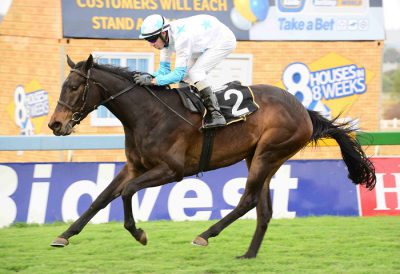 PICK 6 BANKER. Piere Strydom has made Pilgrim’s Progress, who runs i9n Race 4 at Turffontein today, a banker in all bets. Picture: JC Photographics

There is just one week before the running of this year’s Peermont Emperors Palace Charity Mile at Turffontein.

From a jockey’s point of view it is an exciting event not only because of the horses but it also gives us a chance to mingle with the celebrities which is special to us because we get to know what they are like.

There is still a week to go but my selection at this stage is New Predator. He looked short of his best last time and probably needed the run.

He looks the best prepped runner for this race and should be the horse they all have to beat.

There are some supporting features but they also could be competitive and we will discuss those races next week once the final fields have been announced.

We also all finally raced on the Classic track at the Vaal last Tuesday and every jockey rated it as probably the best course in the country at the moment and those who have experienced the refurbished Durbanville track say that there is little to choose between the two.

We are always quick to criticise when things go wrong and do not often send out compliments, so well done to Phumelela and Cape Racing for turning two really difficult tracks to everyone’s satisfaction.

We are racing on the Inside track at Turffontein once again and Race 1 looks a tricky Maiden Plate. My first selection is Quick Glimpse with the danger coming from Tiger Lace, who has had three decent runs at the course.

I make Diamond Noir worth a bet in Race 2. Not only has she got the best form but she has been running off shocking draws and this time should have an easier task from draw No 4.

The only danger is Smokey Affair as she has raced against a lot better. Last time she ran poorly and was beaten by a street but it was in soft going in a Grade 2 race.

I ride Sisters Of Mercy who had her first race after a rest just a week ago and I’m hoping for some improvement.

Race 3 is a Maiden Plate and has a Place Accumulator banker in Harlan County. He ran second in both of his last two starts and has room for even more improvement.

The dangers are Roman Flight and Volcanic Sunset. Both are coming off rests and both have the worst of the draws. On that basis Harlan County should be even more of a sure thing.

Race 4 has a potential Pick 6 banker in Pilgrim’s Progress. She’s quite a nice looking filly and won her last race with consummate ease from a bad draw as well.

She stands out as the rest of the field has very similar form.

I ride Tundra Taita who has good enough form to place in this field but I would banker Pilgrim’s Progress in the PA and Pick 6.

Race 5 is a very difficult handicap for fillies and you need to include as many as possible. The horses to beat are Iridium Silver, Monarch Air and Golddust Woman.

I ride Microbe who won a maiden a week ago in what looked like a weak field. I think she should stay the extra distance and as this is also a moderate field it could be the right time to experiment and see if she does stay.

For the PA put in the first three mentioned. For the Pick 6 add in Microbe and as many others as you can afford. I would even consider the field.

Race 6 is an Apprentice Handicap and sometimes the best horses do not win because of the rider’s inexperience. On form I’m leaning towards Mambo Symphony, Edisson and Rebel Baron.

They should be good enough for the PA but for the Pick 6 consider Highway Eightyfive, Walter Smoothie, Walker and Shortstop.

Those three should be good enough for the PA but for the Pick 6 consider Esploratore as she is lightly raced and could make much more improvement.

Race 8 is yet another difficult fillies’ handicap and it is an apprentice race as well. The main horses to beat are Miss Aphrodite, Timedtoperfection and Catwalk Tease.

Those should be good enough for the PA and the Pick 6 but if you look beyond those three you will need to go with the field.

Race 9 is another competitive race on a difficult card and my main selections are Dromedaris, Stunned, Sputnik Plain, King’s Drive and Sabastian.