In a moment, Marie Monville's life changed forever. Eight years ago – on October 2, 2006 – her loving husband and father of three, Charlie Roberts, entered an Amish schoolhouse and shot 10 girls – killing five – before taking his own life. 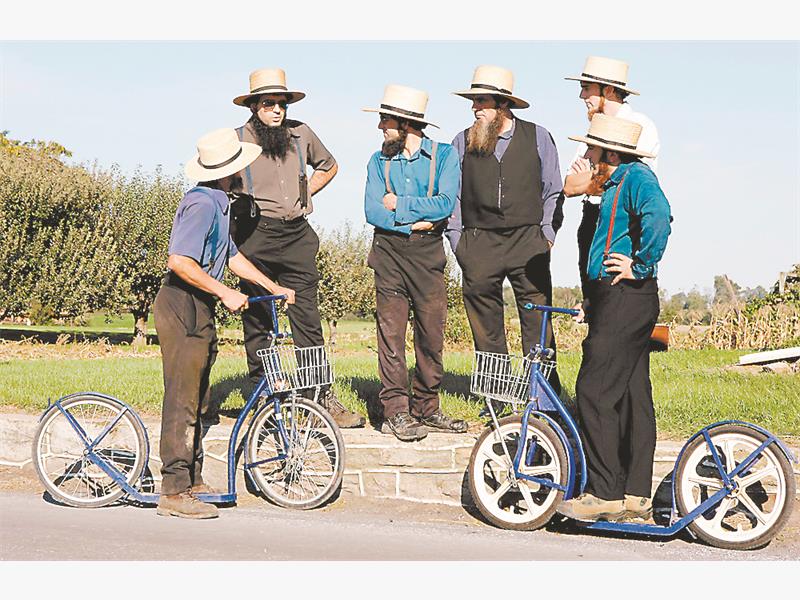 SORROW-FILLED. A group of local Amish men gather near the scene of the mass shooting at an Amish schoolhouse in Pennsylvania in 2006. Picture: Supplied.

The man Monville had loved for over 10 years was no longer there and her life shattered into pieces.

“I had never known a place of desperation like that,” Monville says.

“There was nowhere to run, nowhere to hide. There weren’t any real answers. I was being looked on by the world to give some kind of answer, but for me there was no one to go back to, except for the Lord.”

Monville turned to her faith for comfort. As she experienced feelings of devastation, tragedy and immense pain widespread media coverage of the event continued. But it wasn’t all focused on the calamity. Reports examined the tender nature of the Amish community, who without restraint and in the midst of their own loss, reached out to Monville, showing their support and communicating their choice to forgive Roberts for his actions.

“The forgiveness of the Amish community for Charlie and his choices freed me from the weight of giving a response for his actions and released me into the healing arms of God. My life has been deeply impacted by their love and gifts of grace,” she says.

Initially, it’s hard to fathom the peace and tranquility that Monville experienced in such tragic circumstances. Her choice to focus on God, no matter what the circumstances, inspired Monville’s story – now captured in her book One Light Still Shines.

She explains: “Writing the book gave me the opportunity to look at my life in a different, cumulative kind of way. It allowed me to revisit a lot of difficult places but see them from a broad scope, years later, instead of being so close in the moment. There were many challenges but also many areas in which to find life.”

When asked if it was difficult to put pen to paper, she says: “I experienced a variety of emotions while writing, but none that I hadn’t experienced many times in the previous years. I followed the leading of God with each chapter, and as my heart was stirred, I wrote. My aim is to share the hope I’ve received.

“The Charlie I knew for almost 10 years of marriage was not the man who walked into the school house that day. Everything he did was in complete opposition to all he had been to our family.

“Your life is a love story – God has not put down the pen and walked away. He is always with us and continues to write a love story across the pages of our lives even when we can’t see it. Trust Him, and believe that He will bring you through,” Monville concludes.