Mom of 11 shares her story of possibility as she goes through pregnancy, pandemic and a beauty pageant. 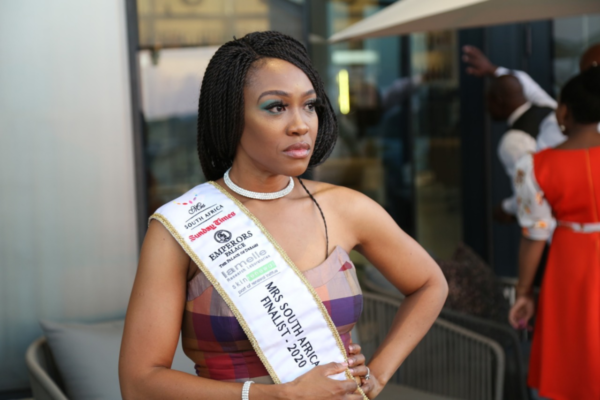 Mrs South Africa 2020 finalist Pearl Osa found out she was pregnant with her 11th child shortly after she entered Mrs SA  in February 2020. That did not deter her.

Pregnant in a pageant

Pearl, 42, chose not to share news of her pregnancy with her online audience.

“I chose not to disclose my pregnancy because I didn’t want to hear the negativity and other people’s projection of how impossible it would be,” Pearl says. She had assumed the pageant would be canceled after the Covid-19 lockdown announcement was made in March 2020.

The pageant continued and Pearl had to continue finding sponsors for her campaign while pregnant. This was a challenge for her: “I sure did not look anything like a beauty queen because I couldn’t keep dieting and exercising.

“I knew that my assignment in the pageant was to demonstrate the possibility to other mothers; to let them know that having children could be the beginning and not the end of their dreams and aspirations,” Pearl says.

“During the lockdown, pregnant and in a pageant, I was still releasing music with my husband, running with my charity work of feeding widows and generating content for my YouTube channel and other social media platforms.”

She was also home schooling her children and her successes on that front have been undeniable. “My five year old learned to read and my four year old is almost ready as he is reading his single-syllable words,” Pearl says.

Her home schooling journey recently celebrated a big milestone when her oldest child, 16, was accepted to a university.

Pearl says “anyone who knows the process of university admission will know that is a story of possibility in and of itself.”

A former head of learning and development in the banking and telecoms industries, Pearl has been home schooling her children since 2014. She made this decision after an “uninspiring” chat with her children’s teacher in 2013.

The pandemic and subsequent lockdowns changed many lives and took many others. “I think with the devastating impact of the pandemic on people’s lives, I became more determined to be a symbol of hope and new beginnings,” she says.

“If a mother with 10 children can go through a pregnancy and parent 10 children during a lockdown, it is possible for me too.” This is what Pearl wanted to inspire other women to believe.

She refused to quit. She got creative and sourced support for her first and possibly last pageant. “I took advantage of the ‘new normal’, holding meetings and sending proposals virtually.”

Pearl made it on a virtual top 50 judging event while she was six months pregnant.

When the pageant could continue as normal again, Pearl had given birth and had two weeks to “shape up”. She collaborated with a fitness brand and continued to share her journey in her book, My Journey to Beautiful.

“Motherhood has been a central driving force of the career decisions I have made,” Pearl says. She left corporate SA when she was a mom of four children. “I knew that, as one who had a unique calling to have these children, the private sector was not for me.”

Being an edutainer and mompreneur has afforded her the flexibility to put her children first and leave a meaningful and impactful legacy for her generation.

Her Mother’s Day message to you

Pearl urges mothers to explore and fulfil their every purpose and assignment in the appropriate season of their lives. To them, she says: “Shine in front of your children, shine for them so that they have permission from you to be great.”