One would think Rich Mnisi was the first man to ever wear a skirt, but he is not. Take a look at the men who rocked skirts before he did. A piece of cloth or animal hide tied or wrapped around the waist (also know as a skirt) is a garment as old as time itself and long before gender constructs were what they are today, men were happily and freely wearing skirts with no fears for their masculinity whatsoever.

According to various entries cited in a Wikipedia page on skirts for men, the practice of men wearing skirts dates back to prehistoric times. It is widely viewed as a practice that was common in Egypt, however, the variations that exist today prove that the practice is not foreign to western men.

It wasn’t up until the 16th century that skirts and togas (dresses) were only viewed as acceptable when worn by women.

Recently, advents in gender theory have led to a shift in how many things are perceived. Many members of society are advocating for a more gender-neutral, non-binary approach to everything in life. Considering that fashion serves as a medium for expression and therefore a means of communication, people are more inclined to not only just do what they like while they can, but send a message while doing it.

And boy did South African designer Rich Mnisi send a message – a message that was seen across the country when earlier this week South African social media users found themselves debating whether or not it was right for him to even be wearing one.

The conversation lasted for so long, one would end up thinking Mnisi was the first man to ever wear a skirt. But he is not.

Let’s take a look at a handful of men who’ve worn skirts long before South Africa’s most beautiful man (Mnisi) did.

If you spend a fair amount of time on social media then you will be familiar with Mark Bryan.

This straight, married-father-of-three’s legs have been seen millions of times around the world and that is because people cannot believe that Bryan has committed to wearing skirts every single day, simply because he can.

The 61-year-old American native currently resides in Germany where he works as a robotics engineer.

His story has captured the attention of billions, having been featured on websites such as NY Post, Daily Mail and Bored Panda.

He has even featured in magazines such as InStyle because he’s just that stylish.

In another instance of a man in a skirt making headlines, American actor and rapper Jaden Smith was all anyone could talk about back in 2015 when he modelled for Louis Vuitton’s women’s line. This after wearing a skirt on a day out.

Like Bryan, Smith is also a cisgender, heterosexual man.

In a cover feature with Nylon magazine back in 2016, Smith explained that his choice to wear a skirt was fuelled by his desire to normalise the practice.

Unfortunately, that doesn’t seem to have worked since people speak about it like it has never happened before every time a man steps out in a skirt.

Even his own father, Will Smith, struggled with Jaden’s choices as Smith admitted to being “more old school”.

Harry and Meghan step out in matching skirts in Tonga

British pop singer and former One Direction band member Harry Styles set American right-wingers off when he wore a skirt in November 2020. This was just last year.

According to a number of articles written during the time, there we calls for society to “bring back manly men”.

However, this reaction begs the question as to why this return to fashion’s earliest days is seen more as an assault on masculinity than a simple look back to the fashion of year one?

There is no society that can survive without strong men. The East knows this. In the west, the steady feminization of our men at the same time that Marxism is being taught to our children is not a coincidence.
It is an outright attack.

Although Mayi Tshwete’s wedding attire made waves for reasons other than the kind listed above, he essentially wore a skirt when he got married to former Miss SA Teen turned TV and radio host Zizo Beda.

Xhosa traditional attire is generally referred to as umbhaco (or imibacho, plural). The skirt, made of a distinct material and design unique to the culture, is called isikhakha.

In addition to making political statements through attire, sometimes men are just wearing skirts because it is the most normal thing to us, as is the case with Tshwete. Doesn’t he look freaking fantastic? 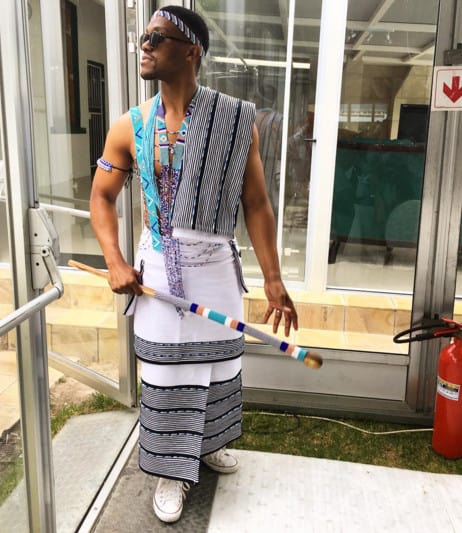 It may not have been a skirt but it certainly wasn’t something a man would ordinarily wear and that is why this Off White dress was seen around the world after musician Kid Cudi wore it during an April performance on Saturday Night Live.

Following the show, Cudi revealed that he chose to wear the dress to pay homage to another male musician who once wore a dress: Kurt Cobain.

These are just five men (six, if you count Cobain) who have worn skirts long before Mnisi. I can bet you 100 bucks that there’s yet another man out there wearing one right now and somehow, masculinity all over the world has remained in tact.