Could Andile Mpisane's obsession with Italian luxury fashion house Gucci be a metaphor for how he sees his life and marriage? 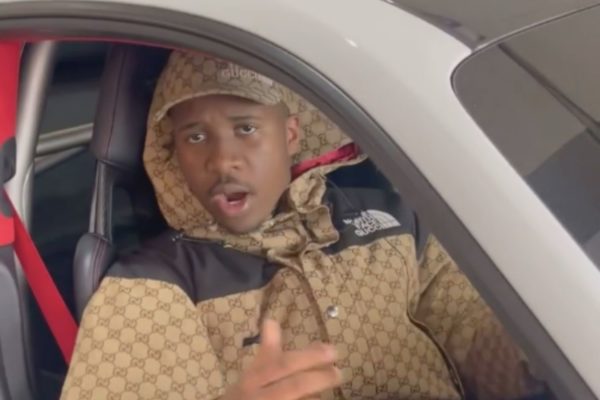 The R54,272.98 ($3,400) Gucci x North Face jacket that Andile Mpisane was spotted wearing on social media is officially sold out, according to the publication Fashion Bomb Daily.

Andile was pictured wearing the jacket in an image posted by his new wife Tamia Louw shortly after the pair got married last month.

He can also be seen wearing the jacket, along with a matching cap, in a video posted to his Instagram account showing off his “early Christmas present” – a Porsche 911 GT2 RS Clubsport.

The brand seems to be a favourite of his as he can be seen wearing it in every post thereafter.

Fashion Bomb Daily reported that the jacket was sold out after gospel musician and producer Kirk Franklin was spotted wearing it over the festive season.

Some weeks ago, Tamia was made fun of after the anonymous Instagram account called Fake Gucci Community, called her out for wearing a knock off Gucci jacket alongside her husband Andile Mpisane.

According to The South African, the wildly popular social media page is known for naming and shaming celebrities who wear fake designer labels with a particular focus on highlighting Gucci fakes.

“Newlyweds I see his and hers vibe with the husband. Unfortunately, not everything is real. The jacket @tamia_mpisane is wearing is a “Never been made before”. My sources reveal it’s not part of the original Gucci collection,” wrote the account in a caption underneath a repost of Tamia’s picture.

Recently, Tamia (who now goes by her husband’s surname) made headlines after fans decided that she may be expecting her first child with Andile.

This after he posted another video of them, once again in head-to-toe, his and hers Gucci with her sporting a noticeable bulge in her tummy area.

“Love life is Gucci,” reads the caption, making reference to the fashion house as well as the fact that the term “Gucci” is considered synonymous with good.

“Umithi lona,” (this one is pregnant) commented @caslo___ under the video, while @zandile_mtshotwana asked “is she pregnant?”

“Am I seeing a bump is she pregnant with twins,” commented @thereal_milodavidson with many other comments following a similar vein.

Neither Tamia nor Andile Mpisane have said anything about fans’ speculation, however, considering their affinity for grand announcements, we’re bound to find out what’s happening in no time.