The Unilever Junior Chef of the Year always knew he belonged in the kitchen. 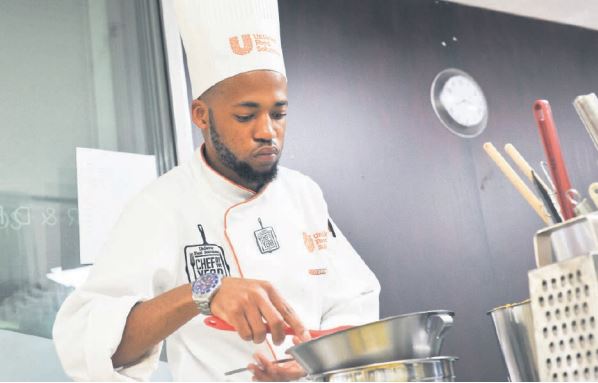 Unilver Junior Chef of the Year is Terror Lekopa of the Saxon Hotel in Gauteng.

While his folks gave him the commanding name Terror, hoping that their beloved son would one day develop a love for politics, Lekopa explains that his interests were always poles apart from policy making and just in the kitchen, right next to the stove with an apron.

He has always known what he was meant to do, and continuously hoped his parents would understand that Terror can also be a powerful name for a chef that makes a killer lamb curry.

Lekopa, Chef de Partie at The Saxon Hotel in Sandhurst, Johannesburg, took his apron off, stepped away from his favourite place, the kitchen, to share a bit about himself and a craft he certainly excels in.

“I fell in love with food when I was in high school, if I remember. I used to bake a lot and make my own lunch. Somehow I believed that I made it properly, better than anyone else could. My schoolmates used to say I would end up as a chef, and they are not surprised that my path went in the direction they anticipated.

“My parents, on the other hand, continually wondered why I loved being in the kitchen and cooking so much. I think it’s because I’m a guy, and they believed that with the name they gave me I would end up as a politician. However, I think they are slowly accepting my career.

“The dish I would never mess up has to be a lamb curry. Never, ever will I panic with this one. I’ve been cooking it for three years in large quantities. Even my fellow chef colleagues say I make the meanest lamb curry.

“The worst dish I have ever made has to be prawn curry. I underestimated it. Maybe I was just too confident. There I was using the same ingredients I used on my lamb. Big mistake! Those spices just overpowered the prawns.

“When I burn food I feel like such a fool, but just for a moment. I feel like a loser but I quickly snap out of it and try to fix my mess, so I start from scratch. Making mistakes becomes normal in the kitchen, just as long as you fix them.

“The one ingredient I can never do without has to be garlic. I need to have it with me all the time in the kitchen. If you mix that with thyme, you can never go wrong. The flavour is nice, and they are just a match made in heaven. The aroma is amazing.

“I don’t necessarily like going to restaurants. This is because I can cook food for myself better than someone else can for me. I know what I like, and I know how I need it made. If I had to go to one though, I would opt for The Taste Kitchen.

“I would never pay more than R2 000 for a meal, but then again if you want great food you have to pay the price. Food is expensive, and you need to remember that there is someone else preparing that meal.

“The Unilever Chef of the Year competition was nerve-racking. I was scared the night before the competition. I couldn’t sleep. On the day I had to do what needed to be done to win. I practised the day before, so I was able to manage my time compared to the past two years.

“I’m happy about the R10 000 cash prize, but I can’t wait for the trip to Nice on the Côte d’Azur in France, to apprentice with Chef Jan Hendrik in his Michelin-star restaurant. I know I will learn a lot from such an inspiring chef, and bring the knowledge back home.”