Volkswagen Amarok Ultimate against the clock

Amarok is slightly faster than the Ford Ranger, Toyota Hilux and the Isuzu KB. 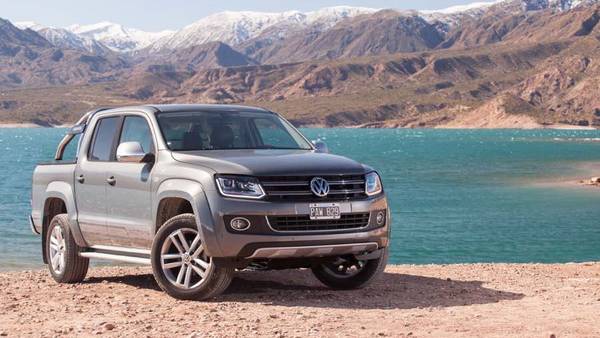 As promised last month, it was time to take my VW Amarok Ultimate to Gerotek to see how it performed when attached to my Racelogic VBOX test equipment.

You might think that this type of hardcore data road test is pointless, but let’s be straight, it’s a war out there to see who has the fastest, meanest bakkie on the streets and in the showrooms. As you will read elsewhere in this supplement, premium double-cab sales are growing around the world, so much so that even Mercedes-Benz has unveiled their Concept X-Class bakkie that will be here at the beginning of 2018.

The Amarok still remains the first eight-speed bakkie on the market and with this many ratios on offer, you seldom if ever find the Amarok hunting up and down the gearbox to remain in the torque band when on the open road.

The big plus is that although this is not a double clutch (DSG) type box, but still an older torque converter set-up, the gear changes are still almost unnoticeable, and this really makes for a pleasant everyday drive.

There is a manual mode and a sport mode, although the only time I have ever used the sport mode is at Gerotek when doing my testing.

And although sport mode lets you hang onto a gear that little bit longer, the difference between the two modes is minimal. Making the most use of its 132kW and 420Nm from the 2.0 litre twin turbodiesel powerplant to move its claimed weight of 1 875kg, the sprint times and overtaking times are more than acceptable with the 0-100km/h test covered in 13.35 seconds and the 80-1 200km/h speed covered in 9.76 seconds.

The top speed comes in at 186km/h at 4 100rpm in seventh gear, with the speed limiter kicking in a fraction later if the road goes downhill.

I have attached some basic data from the main competitors, the Ford Ranger, the Toyota Hilux and the Isuzu KB, in the high in premium segment. And as you will see, the three bakkies that make 130 type kW power all run similar numbers with the Amarok being fractionally faster than them.

It is only the 147kW Ford Ranger that gets away from them all thanks to its superior capacity, power and torque. But VW will soon have an answer for that, because next year sometime a 3.0 V6 Amarok is coming to SA.

Despite the claim by VW that the Amarok should only consume 8.3 litres/100km on average, my number so far has come in at 10.6 litres/100km, which is not as good as the Hilux or Isuzu but better than the Ford. I guess you gotta feed those horses in the Ranger.

The Amarok is a very smooth everyday commuter and the suspension set-up that consists of a double wishbone in front and rigid axle with leaf springs in the rear does a great job when unladen on tar and dirt.

My Amarok will be going to the farm for some serious off-roading shortly and I will be loading it up and using it as my holiday car down to the coast at the end of the year, and then I might be able to tell you something different.