Here’s how the facelifted Golf looks…

The refreshed Golf GTI with more power will reach South Africa in the second quarter of 2017. 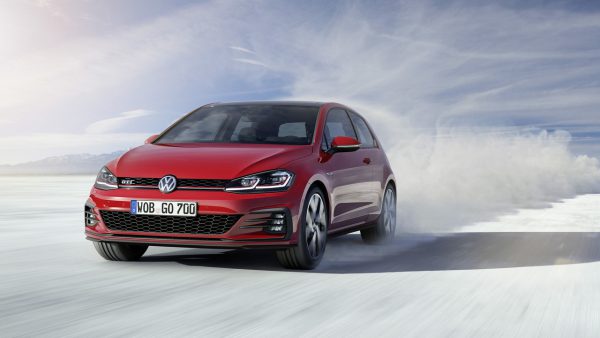 Right after a few leaked images emerged of the facelifted Volkswagen Golf, which is expected to land on our shores in 2017, the automaker has finally revealed its refreshed Golf Mk7 that boasts subtle styling tweaks and LED headlights replacing the bi-xenon setup of the current Golf.

Looking at this, engineers didn’t do much work on the outside compared with the inside of the car. For the 2017 Golf, the front fascia has been made wider thanks to the stretched chrome strip on the lower grille.

The rear of the car will now come with full-LED taillights, and, at an additional cost, the three- and five-door body styles are going to be offered with sweeping turn signals. A slightly remodelled rear bumper, a new look for the exhaust tips, along with fresh body colours and alloy wheel designs round off the exterior changes. It’s only when you step inside that you notice the two big changes. Volkswagen says a 12.3-inch entirely digital instrument cluster is going to be available at an extra cost and will have just about the same functionality as the larger Passat.

The face-lifted Golf is the first model in the compact car segment to be available with gesture control if fitted with Discover Pro infotainment, with other models from VW’s portfolio to get the technology next year.

In terms of engines, the 162 kW 2.0 TSI powering the standard GTI has been dropped to make room for the 169 kW version now serving as the entry-level model. Should you want a little more oomph, VW will sell you a beefier GTI Performance model with 180 kW. In addition, the engineers from Wolfsburg have developed a brand-new seven-speed dual-clutch gearbox to gradually replace the existing six-speed DSG.

Lesser versions of the Golf will be available with a new and thriftier 1.5-liter TSI Evo engine producing 110 kW and 250 Nm of torque.

The GTI will reach South Africa in the second quarter of 2017. As for the range-topping R model, it should follow shortly to complete the family portrait.