To cover possible gaps in the market, there are now 36 Hilux derivatives. Toyota SA’s senior manager for corporate communications, Clynton Yon, is only half-joking when he says he gets tired of motoring journalists referring to the local “bakkie war”, between Toyota’s Hilux and Ford’s Ranger.

As far as Yon is concerned, there is no war…because Toyota has won. Year-to-date sales figures show the Hilux – South Africa’s biggest-selling vehicle of any type – is already 6 000 units ahead of the Ranger.

He points out that average monthly sales of Hilux run at more than 3 000, which is more from one model than some other manufacturers sell from their entire ranges.

It is more than what smaller manufacturers sell in a few years. One of the reasons for the sales success of the Hilux – apart from the fact it is a Toyota and therefore, unbreakable and that there is a huge dealer network all over southern Africa – is that there are many more derivatives in the Hilux range than in the Ranger.

Now, with the latest refresh of the Toyota champion, a number of additional models have been added to even more fully cover all the possible gaps in the commercial and leisure markets.

There are 36 Hilux derivatives now available. One of the keynotes of the range refresh, says Toyota SA’s product communications manager Riaan Esterhuysen, is the availability of automatic transmissions.

Esterhuysen says that even commercial operators are realising the benefits of autos and such transmissions will be the future of most transport.

The refresh to the Hilux basically entails giving it a new “face”, which is modelled on the striking “square” look seen on the Dakar Limited Edition. This new front end will be in evidence across the normal Raider and SRX models.

The SRX will get the black-and grey-themed Dakar version. Range-topping Raider models get a chrome grille surround which offsets the black horizontal slats and creates a premium appearance.

Toyota says that the “multi-dimensional fog lamp garnishes” on the Raider spec incorporate intersecting horizontal and vertical elements laid out in a matching black and chromium effect.

The SRX’s black-themed front design is intended to “reinforce the tough, no-nonsense appearance of these mid-tier models, says Toyota.

It retains its colour-coded bumpers and now sports a matching stylised skid plate on the lower apron. Tough and no-nonsense attitude is carried through with the functional black side steps and side mirrors. They also get a fancier four-speaker touchscreen infotainment system (which used to be on Raider grade only) with Bluetooth and USB interface, all accessible via steering switches. There is also a revers camera to finish out the spec upgrade.

There are three airbags – for driver and passenger as well as a driver knee bag. Vehicle Stability Control, Traction Control, Trailer Sway Control, ABS, EBD and Brake Assist all form part of the standard package.

The well-received smaller capacity diesel engine, the 2.4 GD-6, provides the motive power for all SRX-badged “bakkies”, delivering 110kW at 3 400rpm and 400Nm between 1 600rpm and 2 000rpm. You can have your choice for manual or automatic transmission, both in six-speed form.

Raider models also get upgrades to the touchscreen multimedia system, including satellite navigation and DVD-playback compatibility.

Bluetooth, USB interface and six-speaker output are all controllable via large, steering-mounted switchgear. A carry-over from the Dakar limited-edition is the new full black interior, complete with black headliner and metallic black interior trim accents.

The larger 2.8 GD-6 four-cylinder diesel engine continues in the Raider – putting out 130kW and 420Nm (450Nm in auto transmission guise).

The 4.0-litre V6 petrol engine continues, with outputs of 175kW and 376Nm respectively. A number of new utility-focused derivatives have been added to the Hilux range across all three body styles – in an effort to best serve diverse customer base.

The SR-grade – which is aimed at fleet and mining customers offering a full safety kit with a lower convenience spec level – has been expanded with the addition of a 2.4 GD-6 Raised Body Manual variant (previously only available in 4×4 configuration). 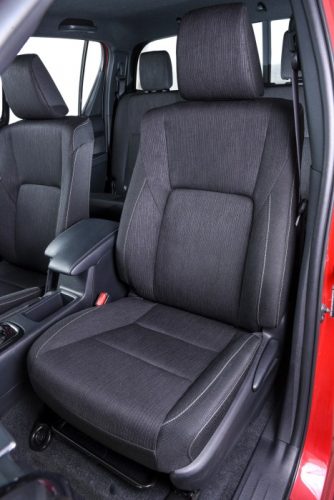 The Hilux Xtra cab models introduced last year were a hit with the market and, as a nod to this, Toyota has added a mid-grade 2.4 GD-6 SRX “Raised Body” six-speed auto – bringing the Xtra cab derivative tally to six.

The double-cab Hilux now also offers an entry-level S mode which, Toyota says, “is a no-frills Hilux aimed at heavy-duty work and foregoes comfort and luxury specification for functionality and durability.

Double cabs have the option of the 2.4 GD-6 diesel or 2.7 VVTi petrol engine, which has outputs of 122kW and 245Nm of torque respectively. GD-6 versions are mated to a six-speed manual transmission whilst the 2.7 receives a five-speed gearbox.

The SR double-cab offerings have been expanded to include a 4×2 “Raised Body” model and also adopt the J-deck layout and black bumper exterior design. The previously offered petrol 2.7 VVTi SRX has been discontinued in lieu of the 2.7 VVTi S.

Toyota is excited about the reintroduction of three Chassis Cab variants to the Hilux range.