The CX-5 is not only a solid and reliable car, it’s actually very underrated. It offers very good ride quality with enough space in the cabin and boot to fit small families and luggage for their daily requirements and road trips. I can’t remember if I was ever officially appointed to the position, but I had hardly reached high school when I became my dad’s chief advisor during his purchase of a company car.

Despite still being years away from learning how to drive, I was probably more excited than my old man on Saturdays because we had dealerships to visit.

And there my rigorous testing would include feeling the finish of the dashboard, sitting on all the seats while inspecting the safety belts and most importantly, analysing the sound system.

While my dad was doing the test driving, I would pepper the salesperson from the back seat with the important questions like how many speakers the car has. A whopping budget of R40 000 was enough to get a very entry-level BMW 3 Series, a decently specced Ford Sapphire or VW Jetta, as well as an almost top-of-the-range Mazda 626. 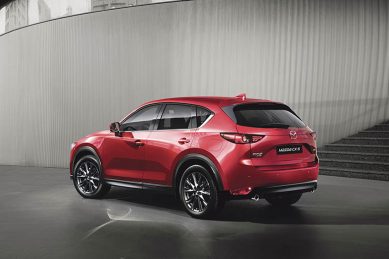 The buyer’s personal preferences ruled out both the Sapphire and Jetta, with the final choice between the Beemer and the Mazda. My dad was quite set on the little matchbox E30 BMW, but my research between brochures and meticulous onboard stock taking was quite damning for his choice of badge. What the Mazda lacked in looks and prestige it made up for in specifications. It had a bigger engine, more space and quite a lot of standard features like central locking, electric windows and side mirrors – which were optional extras on the Plain Jane 3 Series.

We … I mean my dad, had no choice but to go for the Mazda. Fast forward almost three decades and it was déjà vu when I recently got behind the wheel of a Mazda CX-5 test unit.

Impressed by the high level of spec this ambitious SUV has to offer, I was curious to determine how much the extra goodies will inflate the price by. But a quick glance at the brochure established that none of the really nice things this car has to offer are optional extras.

And there is a certain reassurance in that for prospective buyers as it doesn’t matter what car you buy and what the traditional predicted devaluation for that particular model is, it is always the initial buyer who pays for the extras and will never quite get his money back down the line. 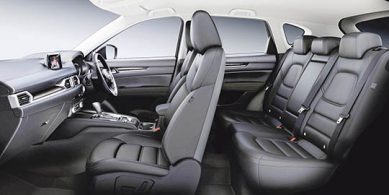 The manufacturer will cash in up front and thereafter salespeople and buyers during the vehicle’s eventual resales, but never the bugger who financed it in the first place, unless he or she gets their way during a private sale. But fitted with niceties to the brim alone still doesn’t guarantee a decent ride as I’ve personally experienced with some French efforts in particular, so the proof was inevitably going to be in the pudding.

I’m happy to report that like in the case of my missus’ malva delight, I’m having seconds. The CX-5 is not only a solid and reliable car, it’s actually very underrated. It offers very good ride quality with enough space in the cabin and boot to fit small families and luggage for their daily requirements and road trips.

The 143kW/258Nm 2.5-litre powertrain is very nippy and responsive and with the six-speed automatic gearbox offers a very enjoyable drive in city traffic. Mazda claims a fuel consumption average of 7.3l/100km on a combined cycle, but in real life we found it to be closer to 9l/100km.

Priced at R557 900 the Mazda CX-5 2.5-litre Individual 6AT AWD is not a budget beater, but in the league it’s batting in it offers seriously good value for money. Judging by the number of 323s, 626s and Rustler half-ton bakkies still on our roads, Mazda’s proud heritage speaks for itself.