Renault Sandero Stepway: Getting bang for your buck

Along with the Volkswagen Cross Polo, Renault Sandero Stepway helped establish a crossover-inspired hatchback niche that has become a favourite among South Africans in recent years. A replacement for the locally built Sandero five years ago, the second generation of Renault’s upper A-segment, body-cladded contender, now wholly made by its Romanian affiliate, Dacia, has firmly established itself as the core derivative within the model line-up in that it has benefited more from the yearly life cycle updates than the “standard” Sandero.

It therefore came as somewhat of a head scratcher last month when the Boulogne-Billancourt auto maker introduced more updates to the Stepway, albeit not as extensive as those implemented 12 months ago when the flagship Dynamique became the better kitted-out Stepway Plus.

From the outside, spotting the changes will only result in strained eyes, with the most obvious being the gloss black mirror caps with red accents and the new Fusion Red paint finish that makes up the three new hues available for the Plus, the others being Cafe Brown and Highland Silver. In truth, the last thing the Stepway needed was more cosmetic work as it still looks remarkably fresh, despite being half a decade old. Combining long-standing model attributes such as the aforementioned body cladding, satin silver front and rear skid plates, roof rails and 193 mm of ground clearance, the inclusion of Renault’s trademark C-shaped integrated daytime running LEDs, blacked-out tail-light clusters and the two-tone 16-inch flex faux alloy wheel covers with their newly colour-coded centre caps, makes for an attractive overall design that matches funky looks with a dose of machoism, thanks to the pseudo off-road attire.

Opening the front door, the interior of the Stepway has always erred on the premium side in look, a surprise at this end of the market, yet it gives this adage up when you run your hand across the various materials.

As welcome as the gloss black detailing around the seven-inch touchscreen MediaNav infotainment system is and how grippy the leather-wrapped steering wheel might be with it faux aluminium inserts, the plastics used tend to feel cheapish, although in the Stepway’s defence, it was never built to the same level as a Clio or Megane. 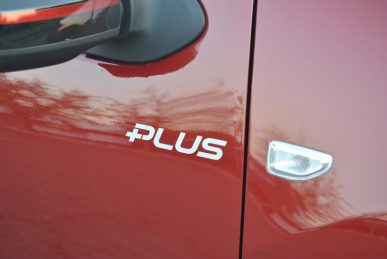 Still an annoyance, however, are the location of the rear electric window switches and cruise control at the base of the facia, while more worryingly was the creaking noise the driver’s chair had developed during the latter stages of our seven-day tenure, especially since our test unit had not even covered 1 000km when it arrived.

Aside from this and grey interior ambiance, the Stepway feels spacious up front, though those of taller stature seated in the rear will find leg room to be a challenge. In its standard form, the boot can only accommodate 292-litres of luggage, although the loss is offset by a full-size spare located underneath the boot floor.

One area where the Stepway has never lacked is in the features department, with the updates now seeing the MediaNav system benefiting from Apple CarPlay and Android Auto. Already offered with Bluetooth, USB and satellite navigation, the system still rates as one the easiest and most user friendly on the market and serves as a display for the reverse camera, added last year. On top of this, the Plus comes with electric windows all around, auto lock/unlock doors, electric mirrors, rear parking sensors, four airbags, ABS with EBD, Hill Start Assist and ESP.

While leather upholstery is optional at R10 000, our tester came with a tartan-like red-silver-and-grey cloth finish with red stitching and silver side bolsters. On the move, the Stepway’s foibles start to emerge, chief of which being the high level of road noise at the national limit. What’s more, the long-serving 898cc turbocharged three-cylinder engine likes to make its presence known with a noticeable three-pot buzz that will become tiresome. The biggest handicap of the engine however is the amount of turbo lag at low revs.

Outputting 66kW/135Nm it might, but the blower takes too long to come on song, leaving the Stepway sluggish. Also a hindrance is the five-speed manual gearbox with its grating sensation between each ratio and high clutch bite point that requires careful modulation to avoid stalling. In contrast to the drivetrain, the Stepway makes amends in the ride area where the soft suspension and elevated ground height makes for a comfortable ride, while the steering feedback is on point for a car in this class.

The biggest boon though is fuel economy, with the Stepway recording a best of 6.5L/100km over its week-long stay covering 398km, a mere 1.1L/100 km shy off of Renault’s claim. 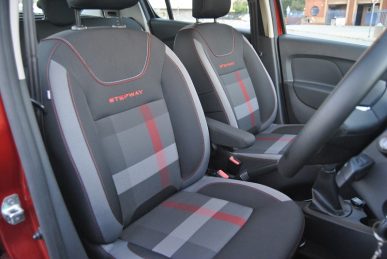 As small as the latest round of updates might be, it has worked in the Renault Sandero Stepway’s favour as one of the best value-for-money offerings in its class. While the raucous engine note and patchy gearbox prevail, the overall package makes it hard to ignore at R213 900.