BMW pick-up becomes a reality, but only as a one-off concept

Despite repeatedly denouncing the idea of a pick-up in challenging the Mercedes-Benz X-Class, BMW has revealed a one-off open-deck concept based on the X7. The result of a joint venture between BMW vocational trainees as well as the marque’s Concept Vehicle Construction and Model Technology divisions, the concept uses the X7 xDrive 40i as a base and is claimed to seat five in a “luxury ambience”.

Claimed to have been completed in ten months, the concept’s loading area measures 1 400 mm with the tailgate up or 2 000 mm with the lid down, with the actual bed being finished in polished wood, while the roof is made from carbon fibre reinforced plastic (CFRP) and measures 10 cm longer than the standard X7.

Fitted with the two-level air suspension system and weighing 200 kg less than the SUV, the pick-up produces the same 250 kW as its sibling, and said to be fully driveable and road legal. 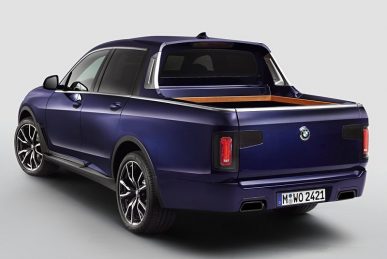 Being a one-off, the chance of the X7 Pick-up reaching production is not likely following comments made last year by BMW Head of Development, Klaus Fröhlich, who told motoring.com.au on the sides of the Paris Motor Show last year that no business case for a such a venture exists.

“I’m the bad guy. I see no evidence that we can ever do a good proposition. Every business case we did so far … it was by far not relevant. The premium side of that market is extremely small,” Fröhlich said. 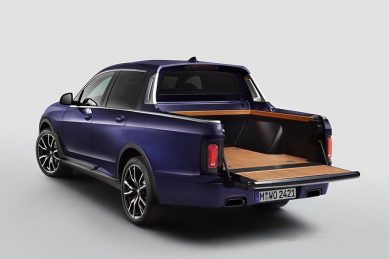 In a thinly swiped at the X-Class built on the same platform and with largely the same engines and interior as the Nissan Navara and Renault Alaskan, Fröhlich told the online platform that, “we will never do something badge engineering” when asked such a possibility.