Size does matter for the BMW X7

Back in the 1980s when bumper stickers were a must, there was a popular one which read: When I grow up I want to be a Lamborghini. Corny but oh so quirky when it proudly sat on the back of a Beetle. Nowadays you’ll look like riffraff for parading around with one of those on your car, but strangely enough, I will have sympathy when I see a BMW X5 with a bumper sticker saying: When I grow up I want to be an X7.

The first-ever X7 – the new head of BMW’s X family tree – is simply humongous. And while it might look like an X5 on steroids, the essence of the German premium brand isn’t compromised one bit. In fact, the sheer size only adds to the car’s imposing appearance which is accentuated by the larger-than-life kidney grille flanked by hexagonal full-LED headlights. And while the driver has the luxury of all the nice things BMW has to offer, a much greater emphasis is placed on the passengers in the back, pretty much like in the case of the manufacturer’s larger sedans.

The X7 comes standard as a seven-seater, with space for three passengers in the second row and a further two in the very comfortable third row. In our test unit – an M50d – the second row bench seat made way for two optional seats complete with armrests and comfort cushions on the headrests. This option – a first for what BMW calls a Sports Activity Vehicle – doesn’t come cheap at R9 600, but that is small change when added to the base price of R1 853 200. These two second row seats both have a 10.2-inch screen in front of them attached to the back of the fronts seats which gives the passengers full access to the car’s entertainment system that includes a Blu-Ray drive and audio jacks for headphones, while they also have the luxury of electronic seat adjustment, dual zone climate control and electronically controlled blinds in the rear windows.

With this option, passengers have access to the third row either through the two second row seats or the more traditional way of folding them down and climbing in behind them. And speaking of the third row, it is spacious enough for two adults and offers an additional glass roof element complementing the panoramic roof in front, cup holders and armrests integrated into the side panel trim. And the third row folds down in a 50/50 split in a pretty nifty time with the touch of a button in the boot, which also automatically moves the second row seats forward to fit the far rear seats.

With the third row engaged the boot offers a very decent 326 litres of space which is adequate for a few schoolbags or a weekly grocery load, while there is all of 750 litres on offer with the third row folded down, with a rolling cover for both options. 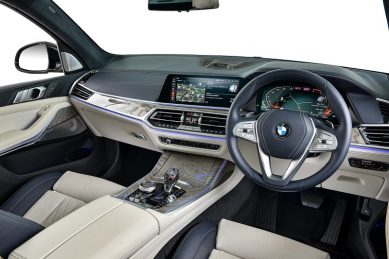 Our test unit also featured a Bowers & Wilkins Diamond surround sound system at R65 200 and the Ambient Air Package for R4 600 which features ionisation and scents for the interior.

The X50d is a heavy piece of work, weighing in at 2 535kg which could edge three tons with the addition of six passengers. But it will take much more weight than that to burden the superb quad turbo, three-litre, six-cylinder in-line diesel engine which puts out 294kW of power at 4 400rpm and 760Nm at 2 000 to 3 000rpm to all four wheels. The powertrain is mated to the proven eight-speed Steptronic transmission and is claimed to go from 0 to 100km/h in 5.4 seconds, which we have no reason to doubt.

What we do doubt, and have proven beyond reasonable doubt, is the claimed fuel consumption of 7.3l/100km on a combined cycle. Our average for the almost 600km we clocked – mostly in Comfort mode – was a shade under 12l/100km, which is very far off the mark, but actually still kind of decent taking the car’s weight and our stern testing into account. And while the X7 feels like a luxury cruise ship on the open road with the Active Cruise Control engaged, we were also very impressed with how it handled gravel roads thanks to air suspension in the front and back and a generous wheelbase of 3 105mm. Safety is also at a premium in the X7 with the Driving Assist Professional package featuring a host of systems as standard.