With the revised Titan having made its debuted at the beginning of the month, Nissan has now applied the same updates to the heavier duty Titan XD in North America.

Still shrouded in speculation that it might be heading for right-hand-drive markets as a result of heavy lobbying from Nissan Australia, the exterior updates includes redesigned LED headlights with integrated double boomerang daytime running diodes, a reworked grille in three styles, new LED taillights and a model bespoke finish for the tailgate applique.

Inside, the XD will have the choice of three infotainment systems depending on the spec level; seven, eight or nine-inches with Apple CarPlay and Android Auto, as well as over-the-air updates and ability to support up to seven devices. 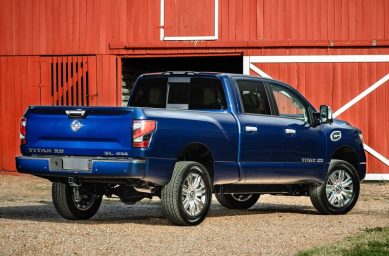 On certain models, a seven-inch instrument cluster display has added along with so-called zero gravity seats and a dual-pane panoramic sunroof on the top-spec SL and Platinum Reserve derivatives, while a 12-speaker, 485-watt Fender Audio sound system can be specified for the mentioned models as well as on the off-road focused Pro-4X.

Model-wise, the XD will go on sale with a choice of five trim levels; S, SV Pro-4X, SL and Platinum Reserve, all in Crew Cab bodystyle with the reinforced chassis allowing for a loadbed size of 165 mm thanks to a stretched wheelbase relative to the regular Titan. 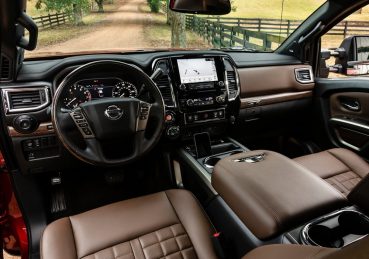 New for four-wheel-drive models is a so-called Off Road Gauge that displays pitch and rollover angles, a Brake Limited-Slip Differential, Hill Start Assist and on the Pro-4X, which receives semi-gloss fenders and a Lava Red NISSAN badge on the grille, an electronic locking rear differential and Hill Descent Control.

Up front resides the biggest change where, like the standard Titan, Nissan has dropped the slow-selling 230kW/752Nm 5.0-litre Cummins turbodiesel V8 for an upgraded version of the 5.6-litre Endurance V8 petrol, which now produces the same 298kW/560Nm as refreshed Patrol. A brand-new nine-speed automatic gearbox is the sole option available.

Available in a choice of seven colours; Glacier White, Super Black, Pearl White TriCoat, Gun Metallic, Brilliant Silver Metallic and Deep Blue Pearl, plus three new hues; Baja Storm, Red Alert and Cardinal Red Metallic, the Titan XD will be built alongside its sibling at Nissan’s Canton Plant in Mississippi with pricing to be announced at a later stage.