Volkswagen has indicated that the Caddy will be “100 per cent new”. With camouflaged pre-production test mules having leaked online in recent months, Volkswagen has released first official teaser sketches of the all-new Caddy reportedly out next year.

In spite of retaining the current model’s basic silhouette, the long overdue replacement for the current model that debuted in 2003 will take after the new Golf in receiving the same frontal facia, while the rear comes with distinctive L-shaped vertical LED lights and a gloss black finish around the tailgate that mirrors the design of the up! It remains to be seen however if the respective details are carried over in the production model. 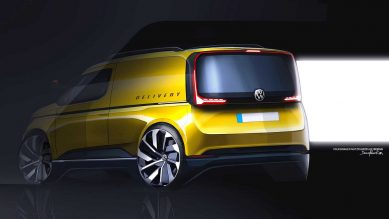 Although no technical details were released, Volkswagen has indicated that the Caddy will be “100 per cent new”, therefore indicating a switch to the updated MQB platform that underpins the Golf and possibly the same selection of TSI, TDI and mild-hybrid eTSI motors. As before, both van and passenger derivatives will be offered.