Lamborghini has retained the normally aspirated 5.2-litre V10 engine, albeit retuned from 470 kW to the same 449 kW as the standard four-wheel-drive Huracan. Lamborghini has followed up the unveiling of the Huracan EVO less than a year ago with the reveal of a two-wheel-drive derivative going on sale in the European spring.

Aesthetically unchanged from its four-wheel-drive sibling, the rear-wheel gripping EVO’s main differences resides underneath its skin where it receives a retuned Lamborghini Dynamic Steering arrangement and a recalibrated Performance Traction Control System that still sports the Strada, Sport and Corsa driving modes, optimised specifically for the two-wheel-drive configuration.

Weighing in at 1 389 kg, a weight reduction of 33 kg compared to its four-wheel-drive sibling, the two-wheel-drive EVO retains the same dimensions and rides on 19-inch Kari alloy wheels wrapped in bespoke Pirelli PZero rubber with 20-inch alloys and carbon ceramic brakes available from the options list. 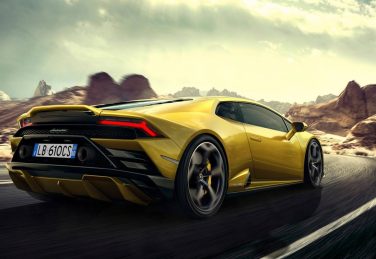 As well as the interior that is carried over, Lamborghini has retained the normally aspirated 5.2-litre V10 engine, albeit retuned from 470 kW to the same 449 kW as the standard four-wheel-drive Huracan, with torque falling from 600 Nm to 560 Nm.

Offsetting the loss in weight, the rear-wheel-drive EVO is also slower than its sibling with Lamborghini claiming a top speed of 325 km/h and 0-100 km/h in 3.3 seconds as opposed to 2.9 seconds. The claimed 0-200 km/h run also increase by 0.3 seconds to 9.3 seconds with the amount of twist going to the rear via a seven-speed dual-clutch gearbox.