Having dropped the teaser video along with a series of cryptic Facebook posts on Monday (2 March), Alfa Romeo officially unveiled the most potent Giulia to date late yesterday afternoon in the shape of the revived GTA.

Heralding the return of a nomenclature last used on the 156 fifteen years ago, the online reveal of the latest model to carry the famed Gran Turismo Alleggerita name, the latter denoting the Italian word for lightened, also culminated in the long awaited return of the GTAm badge that has not been seen in over forty years. 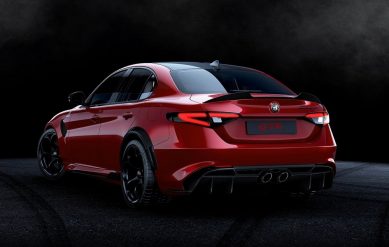 Aesthetically, the GTA builds on the Quadrifoglio Verde (QV) by featuring a bespoke aerodynamics kit made up of wider side skirts, an active front splitter, a unique bootlid spoiler and a carbon fibre diffuser co-developed with Sauber whose Formula 1 team was taken over by Alfa last year.

In addition to a wider, by 50 mm, front track, the GTA also comes equipped with a centrally mounted Akrapovic titanium exhaust system integrated into the diffuser, as well as centre lock 20-inch alloy wheels, upgraded springs and shocks and revised suspension bushings. 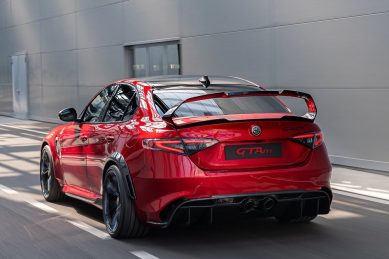 Upping the ante further, the GTAm, whose final letter stands for ‘modificata’, comes with an even larger front splitter and a more pronounced carbon fibre rear wing. As per the alleggerita designation, both models are outfitted with a carbon fibre roof, bonnet, wheel arches and driveshaft, while lightweight steel is used in the construction of the doors, suspension components and the engine. In all, the weight saving amounts to 100 kg with the interior being a further hallmark of the lightweight principle with Alcantara adorning the door panels, glove box, dashboard, seats and side pillars.

Going one step further, the GTAm does without interior door handles and comes instead with pulls, whole the rear window frame is made from Lexan polycarbonate and the rear seats dropped in favour for a roll cage with two specially designed moulds serving as a place holder for a pair of helmets plus the standard fire extinguisher. The unique tweaks are rounded off by carbon detailing and a six-point Sabelt harness. 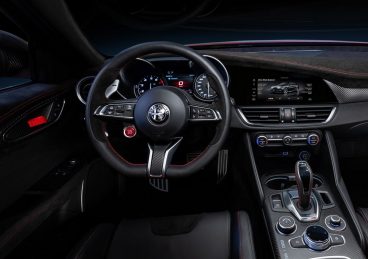 Underneath the bonnet, the Ferrari sourced 2.9-litre bi-turbo V6 engine has been retuned from 375 kW in the QV to 403 kW with torque being unknown. Although no top speed figures were divulged, Alfa claims that both the 1 520 kg GTA and GTAm, with the help of Launch Control, will complete the 0-100 km/h dash in 3.6 seconds, three tenths faster than the QV. As before, a ZF-sourced eight-speed automatic transmission is entrusted with sending the amount of shove to the rear wheels.

Despite no pricing being announced, Alfa Romeo has confirmed that only 500 examples of the GTA and GTAm will be made, each with their own numbered and certified proof of authentication, as well as a so-called personalised kit made up of a Goodwool car cover, a single GTA livered Bell helmet and an Alpinestars racing kit consisting out of gloves, shoes and race suit.