Forward momentum is provided by a 42 kWh lithium-ion battery pack that produces 87 kW. After a production run of nearly 13 years, Fiat has finally unveiled the second generation, modern era 500 at a private launch in Milan.

Signifying yet another departure in the original Italian people’s car linage since its world debut 63 years ago, the 500 dispenses with all petrol and diesel engine in becoming a dedicated all-electric model only, a first for parent company Fiat-Chrysler Automobiles (FCA).

Based on a completely new platform that has extended the 500 by 60 mm overall with the wheelbase being 20 mm longer and the width 60 mm wider, forward momentum is provided by a 42 kWh lithium-ion battery pack that produces 87 kW, which results in a limited top speed of 150 km/h and 0-100 km/h in nine seconds. 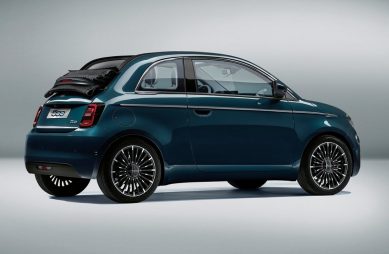 Sporting a range of 320 km between trips to the plug, Fiat claims that the battery can be charged up to 80% in 35 minutes using the supplied 85 kW fast charger and Combo 2 socket, with a 50 km range obtainable after just five minutes charge.

Using the Fiat Wallbox offered with the launch edition though sees the 500 coming equipped with a three kilowatt charger that draws no electricity from a home outlet, although optionally, the more potent 7.4 kW home charger will see the battery being fully charged in six hours.

Able to sprint from 0-50 km/h in 3.1 seconds, the 500 also debuts a new drive mode selector with three settings; ‘Normal’ that mimics a conventional internal combustion engine, ‘Range’ that allows for a one pedal function where the rate of deceleration, when letting go of the throttle, hardly requires for the brakes to be applied unless coming to a full stop, and the interestingly titled ‘Sherpa’ that limits the speed to 80 km/h, dulls throttle response and switches off the climate control in order to reach the nearest charging point or one’s home before the battery goes flat. 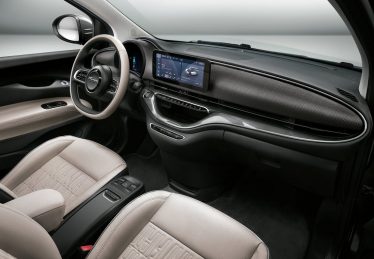 Stylistically, the 500 is very much an evolution of its predecessor with the silhouette being retained, albeit with a completely covered, centred 500 badged grille, a new lower air intake, a new bonnet that conceals the top bit of the redesigned headlights, flush door handles, lightly restyled taillight clusters and a new 500 tailgate badge that sports a central blue border on the final ‘0’ resulting in it resembling an ‘e’.

All new is the interior that features a more minimalist design with the majority of the functions being integrated into a new 10.25-inch touchscreen infotainment system containing FCA’s new UConnect 5 software. Just as new is the seven-inch TFT instrument cluster, wireless smartphone charger, on-board Wi-Fi and so-called ‘seaqual’ yearn upholstered seats taken from the outgoing 500 Hybrid.

In the safety and driver assistance system spheres, Fiat has upped the ante with Adaptive Cruise Control, Intelligent Speed Assist, Urban Blind Spot Assist, Lane Centering and a surround view camera system which contributes in the 500 being capable of Level 2 autonomous driving. 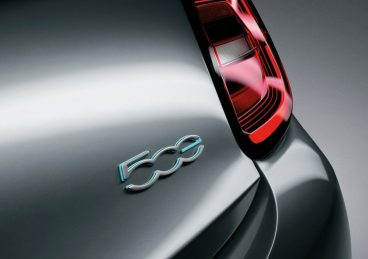 As before, the 500 will be offered in a variety of one-off models, although debuting first is the so-called ‘la Prima’ limited to 500 units and endowed with unique exterior features such as 17-inch diamond-cut alloy wheels with chrome centre inserts, full-LED headlights, an optional monogram soft-top a la 500C, 1/500 badging and a choice of three colours all with an environment feel; Mineral Grey Metallic claimed to represent the earth, the three-layer Celestial Blue that  denotes the sky and the ocean inspired Ocean Green Pearlescent.

Equipped with the mentioned in-car tech as well as the 85 kW charger, added safety comes in the from of Auto High Beam Assist, an electronic handbrake and Autonomous Emergency Braking with Pedestrian and Cyclist Detection.

Now available for ordering in Europe, the la Prima kicks-off at €37 900 (R649 399) but expect pricing to tampering off with the availability of less premium models. As it stands though, don’t expect the new 500 in South Africa anytime soon.