Sedan is 40 mm longer in overall length with the height having gone up by 10 mm and the width by 20 mm. Its debut all but confirmed following the spotting of the Chinese market ‘L‘ earlier this month, Audi has now officially unveiled the second generation A3 Sedan.

Debuting just over a month after the Sportback, the sedan becomes the latest model to ride on the new MQB Evo platform also used by the Golf and Seat Leon, with dimensions of 4 500 mm in overall length, a wheelbase of 2 637 mm, height of 1 430 mm and width of 1 820 mm.

Despite retaining the same wheelbase as its predecessor with the capacity of the boot also unchanged at 425-litres, the sedan is 40 mm longer in overall length with the height having gone up by 10 mm and the width by 20 mm. According to Ingolstadt, a lower seating position for the driver’s char has resulted in headroom improving by 20 mm. 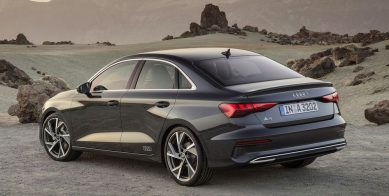 Measuring 150 mm longer than the Sportback, the sleeker, coupe-styled sedan is otherwise unchanged from its sibling aesthetically, with the same being true of the interior which features the same design, as well as tech in the form of the 10.1-inch MMI Plus navigation touchscreen infotainment system, a 10.25-inch instrument cluster and from the options list, a colour Heads-Up display plus the 12.3-inch Virtual Cockpit Display. Safety and driver assistance system are carried over from the hatch.

Up front, the sedan will initially be powered by a choice of three engines; the 35 TFSI using the now widely used 110 kW 1.5 TFSI petrol, the 35 TDI equipped with the stalwart 110 kW 2.0 TDI and the 35 eTFSI outfitted with the mild-hybrid version of the mentioned 1.5-litre engine.

On the latter pair, a toggle switch operated seven-speed S tronic gearbox is standard, which can be had as an option on the 35 TFSI given that the standard ‘box a six-speed manual. For now, all models are front-wheel-drive as quattro derivatives are only expected at a later stage, togther with the performance S3 and RS3. 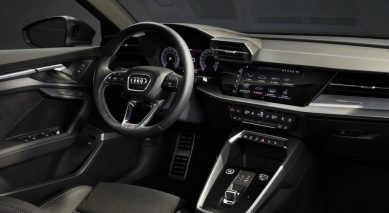