Express loses out on a number of features to avoid conflicting with the Trafic on price. After a hiatus of seven years, Mitsubishi has officially re-entered the hotly contested panel van with the all-new Express, but for now only in Australasia.

First mentioned as heading for a possible revival two years ago, the Express returns as a rebadged Renault Trafic and will go on sale from July as either a short wheelbase offering with a cargo capacity of 5.2m³ or a long wheelbase with a rated volume of 6.0m³.

Unlike the previous Express that debuted in 1986 as the cargo version of the third generation Delica, which received minor updates before being axed over safety concerns, the latest model comes powered by choice of two turbodiesel engines shared with the Trafic. 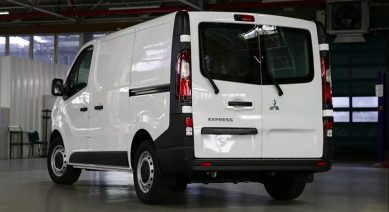 Serving as the starting engine is a twin-turbo 1.6 that produces 103kW/340Nm while the flagship single blower 2.0-litre outputs 125kW/380Nm. While drive, like the Trafic, is routed to the front wheels as opposed to its predecessor’s rear, the Express comes with an electric traction control system known as Extended Grip.

Aside from this and the drive wheels, the Express will offer a choice of two transmission with the 1.6 being paired exclusively to a six-speed manual and the 2.0-litre to a six-speed dual-clutch automatic.

In accordance with comments made last year by former Mitsubishi Motors CEO for Australia, John Signoriello, the Express loses out on a number of features to avoid conflicting with the Trafic on price, but still comes with 16-inch steel wheels, cruise control, dual sliding doors, a height adjustable driver’s seat, Hill Start Assist, rear parking sensors and Blind Spot Monitoring as standard. 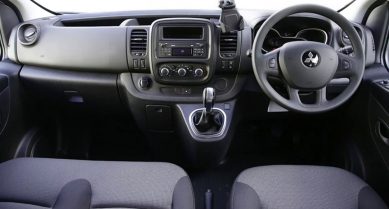 While the upscale 2.0-litre adds rain sense wipers, a reverse camera and auto on/off headlights, a touchscreen infotainment system is not provided with both receiving a conventional Bluetooth and USB equipped audio situated below a small storage slot.

Available in a choice of four colours; Platinum Grey, white, black and red, the Express will undercut the equivalent Trafic priced at $38 490 (R465 505) but as indicated, for now, it is not due to arrive in South Africa.